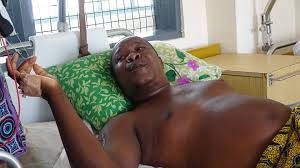 Today’s launch follows the completion of the infrastructure, with successful trials of the drones in the Omenako centre, near Suhum in the Eastern Region.

The commencement of work will facilitate the transportation of drugs and other deliverables to needy destinations to handle emergency cases at health.

The driver’s life was saved last Monday at New Tafo Government Hospital in the Eastern Region through blood products delivered by Zipline drones.

The patient, Charles Coffie Abah, who was elated that the blood delivered by Zipline drones saved his life, told selected journalists on his hospital bed that government should be commended for taking the bold initiative.

Narrating the incident, he told journalists that he was involved in a motor accident and had surgery about 10 months ago at Eastern Regional Hospital, Koforidua, as a result.

According to him, the wounds did not fully heal and he was experiencing some leakages of fluid.

Charles Coffie Abah, who is a resident of Kasoa in the Central Region, explained that he contacted the doctor who performed the surgery about his predicament.

He said the doctor told him that since two out of three theatres at the Eastern Regional Hospital at Koforidua had been temporarily closed down, it would be prudent to conduct a new surgery for him at the New Tafo Government Hospital, which is not congested.

Therefore, he stated that on Monday, April 22, 2019, the surgery was performed to correct the situation for him.

However, Charles Coffie Abah said he bled profusely and at a point passed out, a situation that required blood transfusion to save his life.

According to him, when he gained consciousness, his wife, brother and health workers explained to him how a Zipline drone delivered two units of AB type of Fresh Frozen Plasma and one unit of 0 positive Red Blood Cells, which were transfused to save his life.

He was full of praise for Zipline’s drone delivery of medical supplies, saying it would save a lot of lives.

According to him, a round trip to Koforidua for emergency supplies could take as long as four hours due to poor road network and time to process documentation.

A road trip from Omenako, where a Zipline facility is located, to New Tafo Government Hospital takes some 45 minutes, but the drone takes 12 minutes to deliver supplies.

Dr Wiredu was excited about the drone delivery since time is of essence during emergency situations.

He described it as a game changer that would ensure that the maternal and child health indicators would see a significant improvement once the whole country is covered by the drone services.

“Let’s put on record that this is not coming to replace the existing supply chain that we have. We take our donation from the regional cold room. But there are times we run short of certain vaccines, and when it happens, you cannot deny the child the rest of the vaccine, so this initiative is going to fill that gap,” he said.

When journalists arrived at the New Tafo Government Hospital, immunisation was in progress.

To demonstrate how the technology works, the hospital placed an order for polio and yellow fever vaccines, which were delivered to the admiration of all present.

The drones will not replace the existing supply chain. They will specialise in handling emergency stock out situations.

The Zipline facility at Omenako is starting with 30 drones.

The revolutionary new service will use drones to make on-demand, emergency deliveries of 148 different vaccines, blood products, and life-saving medications.

The service will operate 24 hours a day, seven days a week, from four distribution centres — each equipped with 30 drones — and deliver to 2,000 health facilities, serving 12 million people across the country.

Together, all four distribution centres will make up to 600 on-demand delivery flights a day on behalf of the Government of Ghana.

Each Zipline distribution centre has the capacity to make up to 500 flights per day.

The Omenako facility is expected to serve about 500 health facilities.

Under the contract, Zipline will build three more centres to make it four to cover some 2,000 health facilities in the entire country.