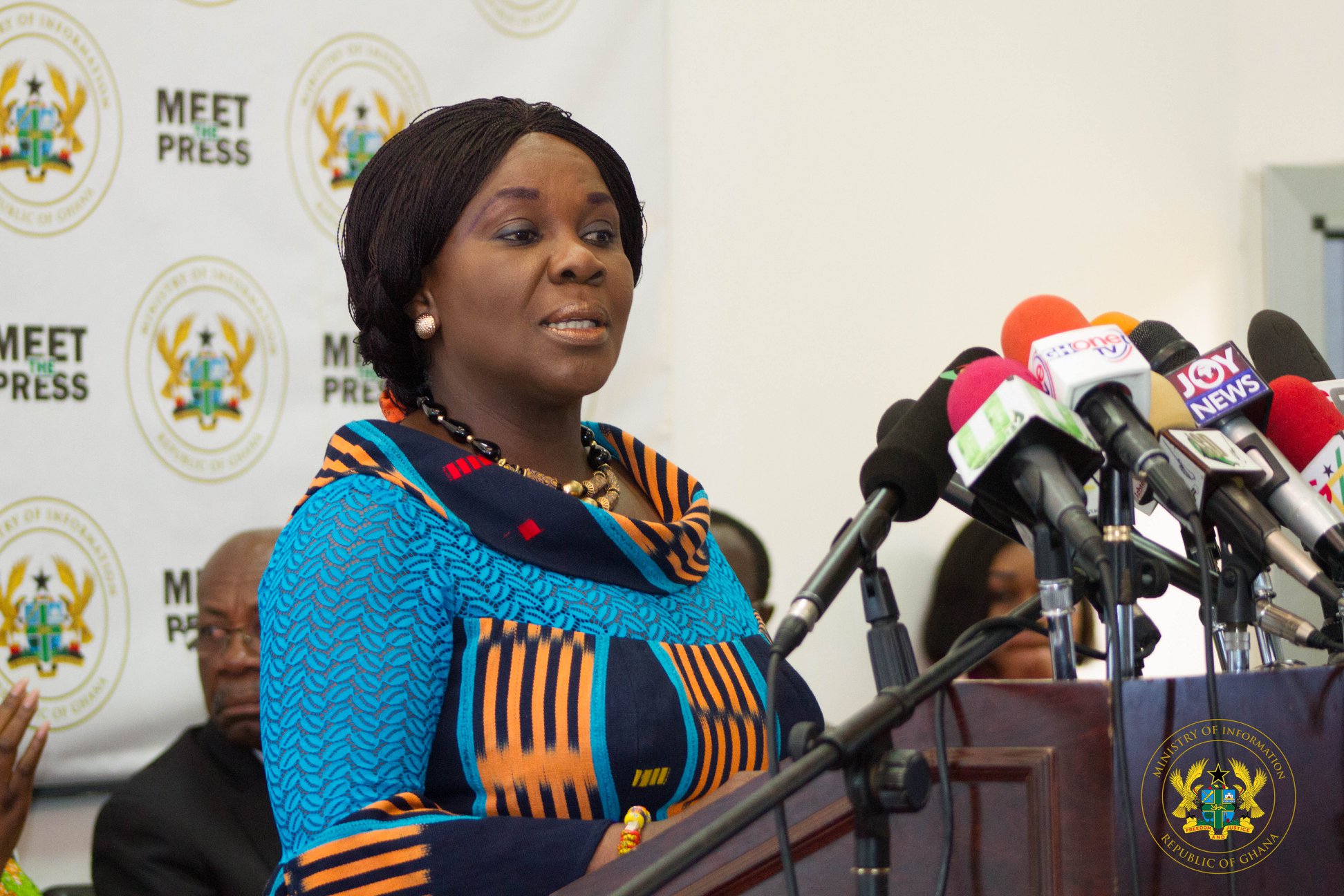 Government has agreed to seek $714.7 million ($714,735,732) before the end of 2019 to undertake four water projects to improve the water supply situation across the country.

According to her, the Tamale Water Supply Project was also being considered.

The minister, she said, has submitted to Cabinet a memorandum for a concessional loan facility of US$272,287,979.56 from the Deutsche Bank AG (London Branch) and UK Export Finance for the construction of a new Tamale Water Supply System at Yapei to improve the water supply situation in Tamale and its environs.

In addition, Damongo, the recently named capital of the Savannah Region, and its environs would also benefit from this project, she added.

The existing water supply system for Tamale and its environs was constructed in 1972 and rehabilitated in 2008, but production is unable to meet the demand for water in the area.

She stated that “it is therefore expected that the creation of the new Savannah Region with its capital at Damongo, population will increase, and this has implications for increase in water demand”.

The Minister also announced that a US$48.1 million grant from the World Bank was secured by government to address water supply in the Greater Accra Metropolitan Area (GAMA).

With this intervention, she said the Urban Water Supply Master Plan has been updated to guide the distribution infrastructure improvement works.

The first phase of the project improved water supply service in Teshie, Nungua, Glefe, Gbegbeyise, Mamponse, Chorkor and Manmomo has been completed and a total of about 72km length of distribution pipelines was laid.

Government has also obtained a €7.9 million soft loan from the Unicredit Bank of Austria to enhance the management of GWCL water supply network.

Under this facility, GWCL will deploy relevant application of Geographic Information Systems (GIS) and hydraulic software to provide spatial data asset register of all the operational units for engineering, planning and visual management, optimisation of revenue through efficient billing and collection, and, more importantly, reduction of non-revenue water, which would be centrally monitored. The loan agreement for the project has been signed. Cabinet and parliamentary approvals for tax waiver have been granted. The project commenced on December 21, 2018 and is expected to be completed within 31 months.

End to flooding in Ghana

Dapaah also pledged to bring a total halt to the perennial floods which continue to take the lives of innocent Ghanaians.

She indicated that it is unacceptable for people to continue to die from floods in Ghana.

To this end, she said her ministry is collaborating with other sector ministries to address the issue.

She reiterated that President Nana Akufo-Addo has made available GH₵197 million for the dredging of drains across major parts of the country.

The money, she reiterated, is allocated to the Ministry of Works and Housing, which is responsible for flood control, to undertake various projects and works to reduce the incidence of flooding in Accra.

Additionally, she said, there would be the construction of more drains to enable the free flow of water when it rained to reduce the perennial flooding in Accra.

Accra continues to be submerged in water after a few hours of rainfall due to choked drains, which do not allow for the free flow of water.

More than 10 people have been reported dead since the beginning of the rainy season this year.

Some environmental experts have wondered why the government did not carry out works on the drains ahead of the rains, even after the Ghana Meteorological Authority had predicted more rains this year than the country recorded last year.

The Minister, while addressing journalists at the Ministry of Information, emphasised the need for a change in attitude and behaviour, as they are important contributing factors in ensuring that the cities and major towns are kept clean at all times.

She said poor sanitation costs the country US$290 million annually.

This amount, she said, is equivalent to US$12 per person per year, which translates to 1.6% of the national Gross Domestic Product.

“It makes a lot of economic sense to invest in sanitation; every dollar invested in sanitation yields US$5 dividends,” she said.

She again indicated that the sanitation services delivery in the cities have witnessed significant improvement in recent times.

She emphasised the need for a change of attitude and behaviour as they are important contributing factors in ensuring that the cities and major towns are kept clean at all times.

The Minister disclosed that her outfit has decided to facilitate the deployment of sanitation guards to help in the enforcement of the sanitation laws.

“Consequently, the ministry has decided to facilitate the deployment of sanitation guards, popularly known as saman-saman, by July this year in the MMDAs to strengthen the enforcement of the sanitation bye-laws to maintain cleanliness in our cities and towns,” she remarked.

Dapaah, in her presentation, again emphasised that, in an effort to ensure strict adherence to the various national and local environmental sanitation laws and regulations in Ghana, the ministry has initiated the process of putting together a comprehensive consolidated national sanitation laws.

She said this will serve as the primary reference document for the preparation of local bye-laws, as well as enhancing successful prosecution of sanitation offenders.

She said the ministry has made significant strides in increasing access to improved sanitation and water supply to low-income beneficiaries in Greater Accra under the Greater Accra Metropolitan Area Sanitation and Water Project (GAMA-SWP).

“As at April 2017, when the newly created Ministry of Sanitation and Water Resources took over the management of the project, the status of the project mainly stood at 1,080 household toilets completed as against target of 19,100.

“Today, the GAMA Project has chalked significant successes, increasing the number of household toilets provided to 19,917 benefiting 159,336 low-income target population. The project has thus exceeded the target population by 44,336, representing 8,800 households, 13 clear months before the end of its duration in May 2020”, she said.

According to the Minister, a total of 406 school sanitation facilities, including girls’ changing rooms, were targeted under the project, out of which 251 have been completed and handed over to the beneficiary schools as of today. The remaining 155 facilities are on average at 92% completion. The 406 facilities are expected to serve a total of 163,000 school pupils.

The Minister reiterated that, “Another significant achievement under the GAMA Project is the improvement in drainage at the Mallam Junction, thus significantly reducing the perennial flooding which had bedevilled the area since time immemorial. The project intervention involved the construction of box culvert across the Kaneshie-Kasoa section of the road. A similar intervention is also ongoing at the Kaneshie First-Light, at 70% completion, which is expected to reduce the incidence of flooding.”

Dapaah added that the cumulative impact of these approaches and interventions has manifested in the most recently released Multiple Indicator Cluster Survey (MICS) report of 2017/2018 by the Ghana Statistical Service. “In this report, access to improved sanitation has increased from 15% to 21% nationally,” she said.

She outlined the sanitation infrastructure components with regard to the Sinohydro facility projects.

In order to achieve the above objective, the Minister further stated that “the ministry is creating land-banks at strategic locations to be utilised as equity to support the private sector in the development of waste management infrastructure. The process of acquiring the first four parcels of land is in progress”.

Dapaah disclosed that measures to overhaul the waste management infrastructure regime, as well as the extensive engagement with prospective local and foreign investors, are far advanced to transform the existing poorly-managed landfill facilities.

“The new direction of the ministry is to pursue the development of more sustainable waste treatment options such as waste-to-energy, composting and recycling, starting from Kpone and Kumasi,” she disclosed.