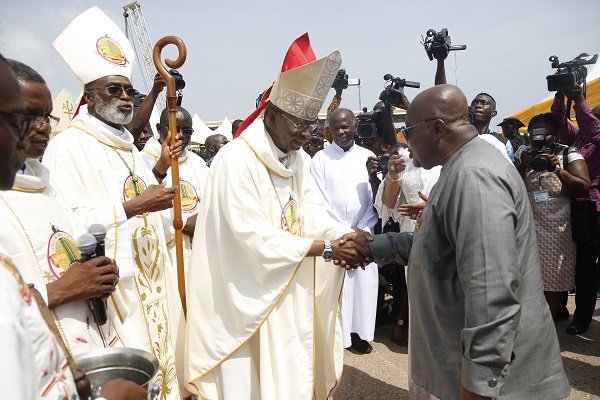 According to the Catholic Bishops, they have held several high level engagements with the president and have always had the opportunity to point out their grievances to him.

General Secretary of the Catholic Bishops Conference,  Very Rev Fr Lazarus Anondee explained that people who are not well informed about the Conference’s engagements with government and its modus operandi tend to peddle falsehoods and accuse them of not being crirical of the the government.

“There is a lot of engagements that go on between the church, the Conference and Government on several levels…. I have heard quite a number of people saying this, I don’t think so. The only way the Church can engage government is not to be issuing statements” he told ABC News in an interview and monitored by BestNewsGH.com

Very Rev. Fr Lazarus Anondee, BestNewsGH.com can report, further explained that being critical of the current administration by criticizing it like it did to the erstwhile John Mahama administration will be tantamount to being likened to an opposition political party.

BestNewsGH.com can also report him as positing that the Roman Catholic Church has its own way of advancing its case and presenting pressing issues to government.

“So it is not necessarily the case that we have to act like- I don’t want to use the term- an opposition party. It shouldn’t be the case, it should not necessarily be the case. If the situation demands that [we] say something publicly, [we] will do it but it is not everything that [we] have to jump on,” Very Rev Fr Anondee added.

He continued that “There are several levels as I said and I think there are many levels of relationship between us and the state [gov’t] and so issues that are burning, issues that the Church needs government to know [and] take note of, I think there is a way to also make those things known,” he explained.

“I also think that since we are practicing democracy we must also allow people space to debate issues when issues come up. The only thing that sometimes is lacking is civility in the debate… But if we are civil enough [and] ready to listen to one another and debate, we will be surprised we will come up with very good ideas [and] very good solutions to some of the challenges that face us,” he concluded.