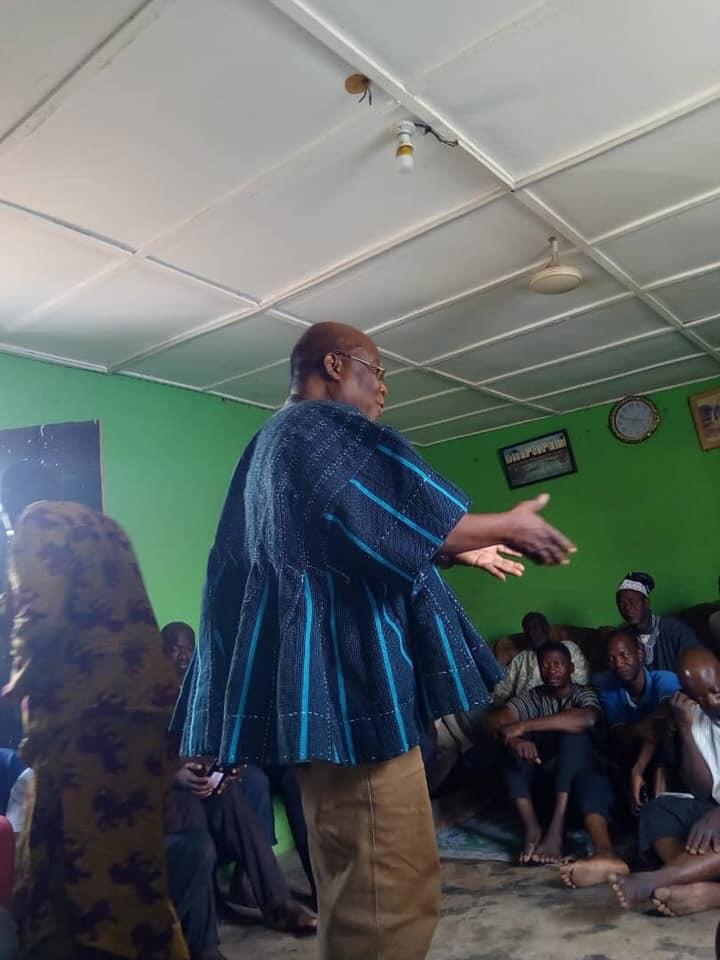 After a successful completion of his tour of the media houses in Wa, the Upper West Region Chairman Mr. SB Kangbere has started yet another historic tour, this time, visiting the various Paramountcies in the region. This move is in line with the Chairman’s vision of reaching out to all stakeholders in the region and to interact with them.

So far, he’s visited the Dorimon, Wichiau and Wa Paramountcies. In his Palace, the Paramount Chief of the Dorimo traditional area, Naa Sohimwiniye Gori II, his linguists, and their  women group welcomed Chairman Kangbere and his entourage into the Palace.

They were happy to have for the first time, seen the regional Chairman of any political party in the region honour their skin in the manner the NPP Regional Chairman did. Chairman Kangberee thanked them for the warm reception and clear show of gratitude for his visit. He used the occasion to assure the Dorimo Naa of his support and the support of the NPP government to the Dorimo traditional area.

BestNewsGH.com reports Mr. Bukari Ali, the NPP Regional Communications Director as intimating that the Regional Chairman took the opportunity to remind the Paramount Chief and his people of the up coming presidential and parliamentary elections and the need for everyone to conduct him or herself in a manner that’ll engender peace and stability before, during and after the elections. The youth were admonished not to allow themselves to be used as tools for violence by anyone.

On his part, Naa Sohimwininye Gori II expressed his gratitude for the gesture the NPP Chairman had extended to him. He said, that, “this is the first time we’ve seen any such visit by any Chairman in this Palace”. He asked for God’s blessing for Chairman Kangbere and said he should not let the visit be the last one. The chief used the occasion to appeal to the  regional Chairman to add his voice in his clarion call for a district to be created out of the Wa West District for the Dorimo side of the district. He said, in the company of some of his chiefs visited the president in the Jubilee House on the matter and his belief is that, Chairman’s input has the potential to add weight to his efforts. Chairman Kangbere did not mince words when he said “I will take it up”.

From Dorimo, Mr. SB Kangbere went to the Palace of Naa Imoro Gomah Nandong ll in Wichiau. Wichiau Naa, like Dorimo Naa said Chairman’s visit was a novelty. He thanked Chairman for the initiative. He took the opportunity to inform Chairman about a Senior High School that has been started and asked for the support of government. Chairman Kangbere reminded the chief and people present about the elections in December and the need to keep the peace and security in the district intact so the needed development can be realised.

From the Palace, Mr. SB Kangbere went to the chief Imam and Tendana respectively to pay courtesies. Both leaders were elated for the honour done them.

The last stop for the day was the site where the constituency executives are building an office complex. Chairman Kangbere could not hide his joy over the amazing initiative that the executives had taken. He pledged to support them in roofing the structure. The youth and women groups present at the site made a number of appeals to their regional Chairman.

The regional Chairman concluded his first round of visit’s by paying courtesies to Naa Fuseini Pelpuo IV. The Paramount Chief of Wa did not say anything significantly different from his two counterparts in Dorimo and Wichiau. He also expressed his joy over the visit. At the Wanaa Palace, Chairman Kangberee made a similar call for peace as he did in the two Palaces he earlier visited regarding the electioneering campaigns and the disturbances that mostly characterise election years. He assured the chief of his commitment and the commitment of government to the development of the region.

In the coming days, Chairman will continue his visit to the rest of the Paramountcies in region.