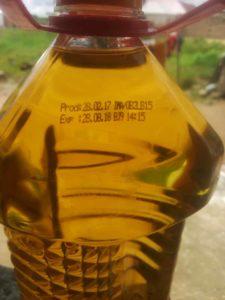 National Democratic Congress (NDC) communications secretariat in the Upper West Regions have accused government and Vice president, Dr. Mahamudu Bawumia of donating expired consumables to flood victims in the region when he visited there over the weekend.

They said at a press conference in the region today that most of the beneficiaries of the items had complained that the consumables were not safe for human consumption as a result of their expired status.

They also accused the vice president of exacerbating the already precarious condition in which the victims find themselves by exposing them to serious health hazards.

The press conference which was addressed by the party’s regional communications officer also cited Dr. Bawumia for discrimination, accusing him of donating a cash amount of five thousand Ghana cedis (5,000) to the flood victims in his home region of Tamale.

‘’Ladies and gentlemen, in other news, we read that still on same visit; Dr. Bawumia gave out other relief items in addition to an amount of GHC 5000.00 to victims of floods in his home northern region. The question we ask is whether by this singular act, the Vice President seeks to consummate the saying that ‘Some Ghanaians are more Ghanaian than others’’ they argued.

Below is the full text of the statement issued by the party and read at the press conference.

A PRESS CONFERENCE ON THE AFTERMATH OF THE DISTRIBUTION OF DISASTER ITEMS BY VICE PRESIDENT HIS EXCELLENCY DR. MAHAMUDU BAWUMIA

Our hearts are heavy this afternoon as the prevailing circumstances within the governance in the country today, reinforces the age old perception of the divisiveness and the disdainful perception that, the NPP has consciously formed against the very hard working natives of the Upper West Region.

Saturday 22 September, 2018 will forever be remembered as it was the day His Excellency Vice President Dr Mahamudu Bawumia entered our Region in Rambo style with three military aircrafts.

Our checks for the cause of the naked extravagance and overt display of opulence by our Vice President revealed he was in town to distribute relief items to our people who had suffered the externalities of torrential rains over the last three months.

Ladies and gentlemen, ordinarily, we all thought the Vice President was in town to exemplify the Age –Old Ghanaian moral etiquette of being each other’s keeper and offering solace for those who unfortunately are hit by distasteful circumstances such as the flooding that occurred in suburbs of our region. Little did we expect that our Vice President will exploit our vulnerability and use our times of grief to further his political whims and caprices.

Ladies and gentlemen, we had the shock of our lives when some of our kinsmen who had received disaster relief items realized that, the items they were given had expired and from all looks are unwholesome for human consumption. We are yet to come to terms with why our Vice President will choose to exacerbate the suffering of our people by exposing them to unquantifiable health challenges at a time they are grappling with pulling the pieces of their lives together after suffering a disaster.

We recall with a painful heart how HE Dr. Mahamudu Bawumia (then running mate to the NPP) posited himself as one who was compassionate to the plight of the people of the Upper West Region. In his quest for power at that time, he responded to the plight of children in Kperisi, who were studying on the bare floor. He combed the nooks and crannies of this region and presented himself and his flag bearer as those who would prioritize our welfare and ensure the region was served its fair share of the national cake. We are extremely shocked that the reward to the people of Kperisi and the whole Upper West after winning power is to return to the region with expired disaster relief items after the show of benevolence in opposition. Aba, Our Son H.E Dr. Bawumia.

Today the love for kingly power and its associated glamour has blinded Dr Bawumia to our plight and has further hardened his heart to the extent that, he serves our people with expired food items at their times of vulnerability and sincere need.

Ladies and gentlemen, in other news, we read that still on same visit; Dr Bawumia gave out other relief items in addition to an amount of GHC 5000.00 to victims of floods in his home northern region. The question we ask is whether by this singular act, the Vice President seeks to consummate the saying that ‘Some Ghanaians are more Ghanaian than others’.

We are calling on the Vice President, His Excellency President Akuffo Addo on whose behalf Dr Mahamudu Bawumia donated expired consumables to our people and indeed, the entire NPP machinery within the region, to come out with contrite hearts and apologize profusely to the good people of the Upper West Region and particularly the disaster victims whom this particular act has left in greater pains.

Ladies and gentlemen, in the midst of these unpalatable happenings, we wish to make the following recommendations

We admonish the NPP and its appointees to remember that, governance is a whole enterprise in which players must be mindful to eschew pretense, hero worship, vexatious populism. This government must also endeavor to be guided by the fact that, charity must be guided by the principles of truth, compassion and humility. We call on Dr Mahamudu Bawumia and the NPP to stop exploiting the vulnerability of our people for their own whims and caprices.