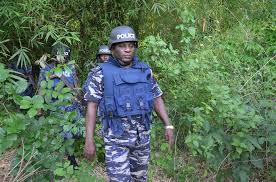 The Director of Communications at the Ghana National Gas Company, Ernest Owusu Bempah has launched a massive campaign for Commissioner of Police (COP) Christian Tetteh Yohuno to be moved to the operations arm of the Ghana Police Service, saying his professional acumen and expertise in fighting crime is unmatched.

According to him, even Commissioner of Police (COP) Nathan Kofi Boakye who is another well-known professional officer who is on top of his game in the fight against crime, is not a match for the current Director-General of the Motor Traffic and Transport Department (MTTD) of the Ghana police Service.

‘’COP Christian Tetteh Yohuno has apprehended and arrested more armed robbers in Ghana than any other police officer. Even Kofi Boakye cannot match him. So why is it that we are putting square pecks in round holes? When this man was the Director-General of operations at the Ghana Police Service, look at the work he did there, he went to the places that were deemed no go areas, where hardened criminals and armed robbers ruled, and fished them out’’ he told Accra based okay fm in an interview.

According to Mr. Owusu Bempah, the recent upsurge in crime rate, particularly the murders of prominent people in the country requires the expertise of an accomplished officer like COP Tetteh Yohuno to resolve.

‘’Why is it that when a professional police officer who knows his work and is performing, we won’t allow the person to deliver? I am calling on the IGP, that the MTTD is not COP Tetteh Yohuno’s calling. That is not his work, he should be brought in as Director-General Operations to do his work. That is his calling, that is his expertise, he has the master code to criminals in this country’’ he said.

Mr. Owusu Bempah continued ‘’if you want, go to the Nsawam prisons and ask the armed robbers there which police officer they fear, ask the murderers the same question and they will all tell you it is COP Yohuno’’.

He said what the country needs right now are distinguished police officers like Mr. Yohuno to ensure that the crime wave is brought under control.