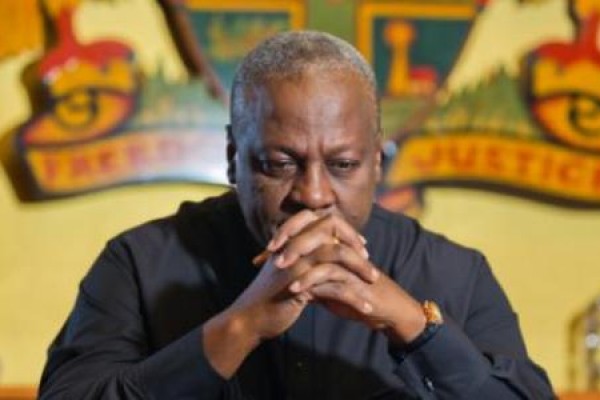 Once again, Ghanaians woke up to chilling news (though it has not been authenticated by the SP’s Office) that His Excellency Ex-President John Dramani Mahama’s name is on the list of the alleged bribery and corruption cases being investigated by the Special Prosecutor’s Office.

If, indeed, the former president’s name is on the said list, then it may well present a fantastic opportunity to clear his name on the numerous alleged bribery and corruption cases which have been linked to him in the past.

After all, in recent times, Ex-President John Dramani Mahama has been challenging President Akufo-Addo to arrest, investigate, and prosecute him and any member of his family if there is admissible evidence to suggest that they amassed wealth illegally during his time in office (See: ‘Jail me! Mahama dares Nana; dailyguideafrica.com/ghanaweb.com, 24/03/2018).

In fact, it is an open secret that His Excellency former President Mahama is standing accused of uncountable bribery and corruption cases which the tattletales somehow claim took place during his days as the vice president and as the president of the country.

Puzzlingly, though, there are more bribery and corruption scandals hanging on the neck of Ex-President Mahama than any other president in the history of Ghanaian politics.

Somewhere last year, we read that four valiant Ghanaians had petitioned the Special Prosecutor Martin Amidu to probe into the alleged E.O. Group’s $13 million corporate social responsibility fund towards the development of the Western Region which the petitioners claimed to have been diverted by Ex-President Mahama (See: ‘Mahama diverted $13m E.O. Group money; probe him – Four citizens petition Amidu’-todaygh.com/ghanaweb.com, 18/06/2018).

Shortly afterwards, we were greeted by yet another news of corruption scandal in the erstwhile Mahama administration, this time, an alleged oil money of GH40.5 million secret transfers to the presidency, via the then Chief of Staff (See: ‘Group explains why Amidu must probe Mahama, Debrah in GH¢40.5m BOST payment’; myjoyonline.com/ghanaweb.com, 19/09/2018).

The vineyard news has it that during his State of the Nation Address on 19th February 2009, the late President Mills informed the Parliament that his government was looking into the decision to acquire two executive Presidential jets.

However, the late President Mills had doubts over the acquisition of the aircrafts later on and thus observed: “Ghana simply cannot afford the expenditure at this time and we certainly do not need two Presidential Jets” (thestatesmanonline.com, 16/06/2016).

Astonishingly, however, whilst the late Mills was joyfully delivering his euphonious state of the nation address, the Vice President John Mahama, who also happened to be the chairman of the Armed Forces Council, was blissfully entertaining delegations from Brazil and busily negotiating the acquisition of five jets, including the most expensive hangar without the knowledge of the late President Mills.

Unsurprisingly, therefore, the late President Mills became suspicious of the whole deal and decided to put a committee together to review the deal, according to Mr Martin Amidu, the Attorney General under the Mills/Mahama administration and the current Special Prosecutor.

Disappointingly, though, according to Martin Amidu, the late Mills could not put his foot down and woefully allowed the committee to somehow turn a blind eye to his directives (Source: martinamidu.com).

As a matter of fact, there are serious questions here that His Excellency Ex-President Mahama must answer. So, it is not surprising that some patriotic Ghanaians have deemed it fit to take him to the Special Prosecutor.

In fact, Ex-President Mahama and his teeming supporters can claim birth right to incorruptibility, but discerning Ghanaians can only take him seriously if he comes clean on the alleged corruption cases.

Apparently, per the unconscionable indemnity clause in Ghana’s 1992 Constitution, any petition has to reach the Special Prosecutor within three years of Ex-President Mahama exiting power.

Let us be honest though, no true nationalist will ever upbraid the petitioners for petitioning the Special Prosecutor to look into former President Mahama’s involvement in the puzzling corruption scandals such as the STX housing deal, the Brazilian aircrafts, the Ford Expedition Vehicle and the Arm To me, Ghana’s constitution has to be reviewed further and the irrational clauses such as the indemnity clause are either amended or expunged accordingly.

How on earth can individuals commit unpardonable crimes (gargantuan sleazes and corruption) against the state and get away with their misdeeds?

And more so the traditional exemption of heads of state from prosecution despite the evidence of a case to answer is wrong.

How serious are we as a nation when we can only descend heavily on the mobile phone, the goat, cassava and plantain thieves, and let go hardened criminals who persistently dip their hands into the national coffers as if tomorrow will never come?

Elsewhere, though, both past and incumbent heads of state may face the laws without any recourse to their status.

Take, for example, in recent times, the controversial South Korean president, Park Geun-hye, found herself in a wide-ranging corruption and cronyism scandal, which culminated in her removal from office in March 2017.

And more recently, former Brazilian president, Luiz Inacio Lula Da Silva, who has been cited as the most famous president in Brazil’s contemporary history, has been sentenced to nine years and six months in jail after being found guilty on corruption and money-laundering charges (Source: guardian.co.uk, 12/07/2017).

In sum, let us give thumbs up to the Special Prosecutor, Martin Amidu for working strenuously towards the insuperable battle against unbridled sleazes and corruption that have slackened our development thus far.