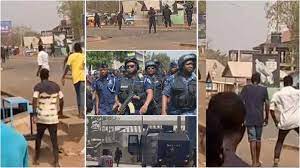 The police administration has interdicted six officers involved in a shooting incident at Lamashegu, a suburb of Tamale in the Northern Region that resulted in the death of one person and injury of several others.

The shooting incident occurred on Sunday, February 13, at about 1pm, and led to the subsequent attack on the Police by the youth of Lamashegu.

One person reportedly died while several others sustained various degrees of injury after some police personnel in Tamale clashed with the youth of Lamashegu.

The incident is said to have occurred after the police on their patrols allegedly stopped an unregistered vehicle but the driver refused to stop resulting in the former chasing the latter.

The driver drove to the Lamashegu chief’s palace for refuge, but was given a hot chase and shot at.

Infuriated by the incident, the youth of the community reportedly peddled stones at the police and burnt lorry tires on the streets.

Graphic Online gathered that one of the victims who was injured during the clash and rushed to the Tamale Teaching Hospital was later confirmed dead.

The deceased identified as Abdul Hakim, a resident of Lamashegu is said to have been hit by a stray bullet, fired by the police.

Meanwhile, the injured are responding to treatment at the Tamale Teaching Hospital while the body of the deceased has been deposited at same facility.

A statement issued by the Director-General of the Public Affairs of the Ghana Police Service, Deputy Commissioner of Police (DCOP), Mr Kwesi Ofori   said preliminary investigations into the matter led to the interdiction of the six.

It said a team of investigators led by the Deputy Director-General of the Criminal Investigation Department (CID) with assistance from the Police Professional Standards Bureau have been dispatched to Tamale to lead investigations into the matter.

The Northern Regional Police Commander, Commissioner of Police (COP), Mr Timothy Yosah Bonga, on the other hand would liaise with the affected families and offer them the necessary support in line with Police Regulations.

The Police further appealed to the people of Lamashegu and the entire Tamale Metropolis to remain calm as the investigation continues into the unfortunate occurrence.