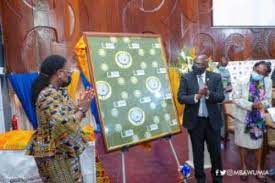 The Ghana Statistical Service (GSS) will release 13,000 tablets to the Ghana Health Service (GHS) for the tracking of pregnant women from antenatal clinics until they give birth, the Vice-President, Dr Mahamudu Bawumia, has disclosed.

He said government was working to link the National Identification Authority (NIA) database, the Ghana card, with the GHS, the Births and Deaths Registry, the GSS and the Ghana Police Service this year.

Dr Bawumia, who made this known at the launch of the 50th anniversary of the Regional Institute for Population Studies (RIPS) at the University of Ghana in Accra yesterday said the synchronisation of the data, when completed, would help to store data on pregnant mothers from antenatal clinics until birth.

Dr Bawumia said the project would likely change the nature of census in the country in the future.

The RIPS, which is under the College of Humanities at the University of Ghana, was established in 1972 for Anglophone Africa, following an agreement between the United Nations and the Government of Ghana upon recommendation by United Nations Economic Commission for Africa (UNECA) in response to a UN General Assembly Resolution 2211 in 1966 that called for the establishment of training centres to guide developing countries in devising and implementing population programmes.

The anniversary is on the theme: “50 years of shaping local and global population issues towards sustainable development.”

The year-long celebration will include a fora on the 2021 census data, UNFPA high level population seminar, World Population day, conference on climate change and population, RIPS open day and will be climaxed with a fundraising and awards dinner.

Dr Bawumia said without timely and reliable data on population, planning would be impossible.

To that end, he said, such data with respect to Ghana had informed government’s specific policy directions and strategies such as Planting for Food and Jobs and the implementation of the One village, One dam to ensure all-year-round farming, especially in northern Ghana.

He said prior to being brought under the digitisation regime, the Births and Deaths Registry had three different sets of data and it was the reason why anybody could easily get a birth certificate and dictate the date of birth they wanted.

“We had these databases sitting in silos and so we had to really accelerate the digitisation programme at the Births and Deaths Registry. Thankfully, we have been able to clean up the data and have harmonised the three databases and now we have just one database,” he added.

While commending the RIPS on its anniversary celebration, the Vice-President noted that 50 years in the life of any institution constituted a significant milestone and that those celebrations served as opportunities for stock taking, reflection and recounting the impact of the institute on national, regional and global development.

Dr Bawumia paid tribute to all vice–chancellors of the university, directors of the institute and all whose dedication culminated in the attainment of the vision of the RIPS.

The Vice–President said census data was driven largely by population issues and had become the bedrock of development globally.

He said it enabled nations to forecast their development amid competition for scarce resources and helped nations to make informed choices that were likely to yield the most returns and dividends for the enhancement of quality of life.

The UNFPA Country Representative, Mr Niyi Ojuolape, described Ghana as a role model in population and housing census from which other countries such as Nigeria, Mali and Liberia had sought her support.

Mr Ojuolape also gave an assurance that the UNFPA would continue to collaborate with RIPS.

The Vice-Chancellor of the University of Ghana, Prof. Nana Aba Appiah Amfo, traced the history of the institute since its establishment in the 1970s and lauded the role played by the forebears in its development to its present state.

Prof. Amfo said she was grateful to the alumni and the institute that had trained about 1,500 students across the continent.

The Board Chairman of the GSS, Dr Grace Bediako, who chaired the function, advised the RIPS to use this anniversary to document achievements of individual alumnus and alumni.

She also observed that the institute had over the years distinguished itself and emerged stronger and resilient.