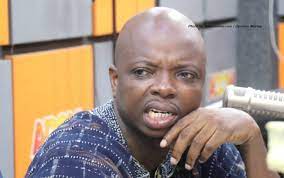 The Bono Regional Chairman of the New Patriotic Party (NPP), Kwame Baffoe, popularly known as Abronye DC has been detained by the police.

He has been charged on two counts of publication of false news and offencive conduct conducive to breaches of the peace.

Baffoe had alleged on radio that Former President John Dramani Mahama was involved in a coup plot.

The police after hearing about the comment invited him to report to the Accra Regional Police Command by 4 on Tuesday [Feb 15, 2022.

But by 2 pm, Baffoe was at the police station.

In a press statement dated Tuesday [Feb 15, 2022] signed and issued by the Public Affairs Officer of the Accra Regional Police, DSP Juliana Obeng said: “preliminary investigation has established that his claims against former President [Mahama] are untrue and likely to occasion a breach of the peace.”

“In view of this, he [Baffoe] has been formally arrested and charged on two counts of publication of false news and offencive conduct conducive to breaches of the peace.”

The police said has been detained and will be arraigned on Wednesday, February 16, 2022.

Baffoe is said to have made the allegation in a radio interview with Accra-based radio Hot FM during a political talk show, “Dwene Ho Bio.”

He is said to have claimed that former President John Mahama had met with the Al Qaeda militants in an attempt to stage a coup in Ghana.

According to him, Mr Mahama is in ties with the group to help him undertake a coup to become president again.

Baffoe was responding to issues leading to the arrest of convenor of the FixTheCountry Movement, Oliver Mawuse Barker-Vormawor, who had also made claims of staging a coup should the controversial E-Levy be passed by parliament.