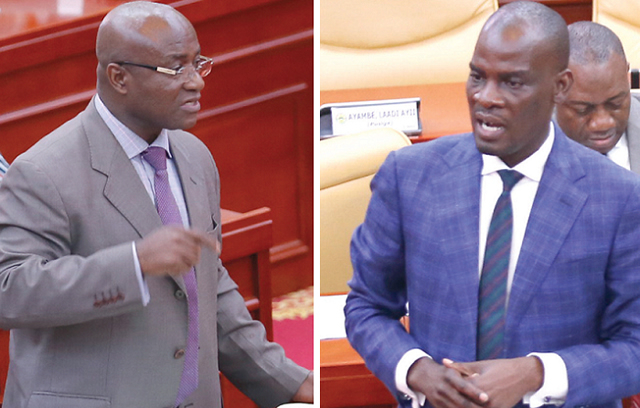 It was billed as an official response to the public as their anger was gutting a controversial plan to build an ultra-modern parliament house.

But on the day when the political rivals were to form a parliamentary partnership and face an angry public, the Minority leader Haruna Iddrisu was missing.

The Majority Leader, Osei Kyei Mensa-Bonsu was left to bear the brunt. It has been a lot of brunts and trolling.

The official opposition in the two-party chamber, the National Democratic Congress had announced it was going to have a press conference on the controversial project.

It was to ostensibly hang the Majority leader, the governing New Patriotic Party (NPP) and the Presidency on this rope.

It is believed the Minority leader’s presence at Thursday morning press conference would have blunted the opposition’s attack. NDC MP for Sagnarigu Constituency in the Northern Region, A.B.A Fuseini maintained the Minority caucus was opposed to the project.

Taking the cue, the Minority leader stayed away.

The Majority leader addressed the press conference, opening a door to the option of freezing the whole project which was expected to start by the end of the year.

Osei Kyei Mensa-Bonsu said parliament will consider “public sensitivities” on the subject and “factor” it into any final decision.

The plan has not been concluded, he tried to calm down emotions. He said a new chamber will ease congestion in the 275-seater parliament. It is also important to enhance security for MPs and the Speaker.

The Suame MP also said the building would also finally house a permanent place for Parliament since it was moved to the State House in 1992.

All these explanations had the support of the Minority leader. At the unveiling of the model last Friday, the Minority Leader was adding suggestions on how the new chamber should look.

He asked that a Diplomatic Room be created to host officials from other countries who may pay a courtesy call on Parliament. The plan for a new parliament began while Joyce Bamford-Addo was Speaker of Parliament under the Mills-led NDC administration.

Talks continued under Speaker Doe Adjaho in the Mahama-led NDC administration. But it is the NPP controlled parliament under Speaker Mike Oquaye that has unveiled the plan.

Now the general public is angry. The Minority leader is nowhere to be found and the Majority leader who once defended the importation of Chinese chairs for MPs is on hand to defend a new project for parliament.