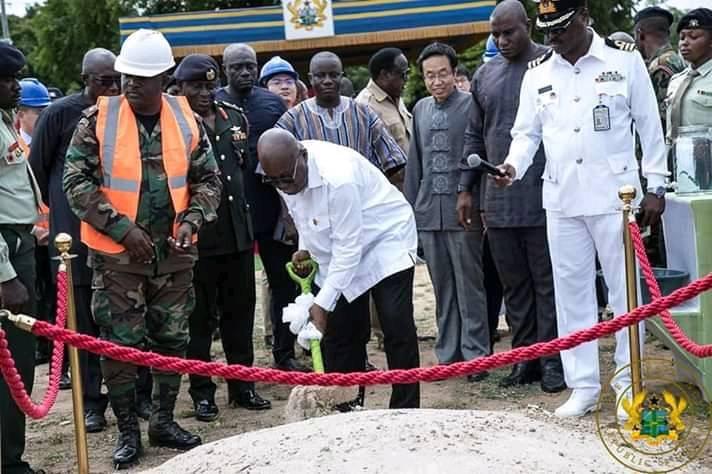 The President of the Republic, Nana Addo Dankwa Akufo-Addo, has cut the sod for the commencement of work on the US$100 million military housing project and reconstruction of the Ghana Military Academy.

The US$100 million project, which will be completed in thirty-six (36) months, will boast of 176 two-bedroom flats; 160 two-bedroom half compound houses; 1 military hostel with 240 self-contained rooms; and 1 platoon commanders’ block, containing four two-bedroom flats.

Speaking at the sod cutting ceremony on Thursday, 4th July, 2019, at the Military Academy and Training Schools, Teshie, President Akufo-Addo indicated that he had been saddened by the lingering problem of inadequate housing confronting the security services, including the Ghana Armed Forces.

“In this day and age, it is unacceptable that senior military officers are allocated residential accommodation or rooms originally reserved for junior officers, with the latter housed in worse conditions,” he said.

Towards addressing and tackling systematically the infrastructural needs and concerns of the officers, men and women of the Armed Forces, and in his quest to deliver on the New Patriotic Party’s manifesto.