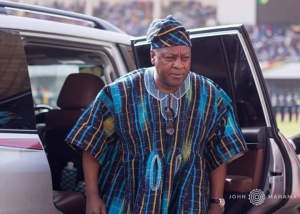 Former President John Dramani Mahama will attend the 43rd Congress of the Gonjaland Youth Association at Damongo, the capital of the Savannah Region on Saturday 20th April, 2019.

The Annual Congress under the theme “Promoting Peace  and Unity in Diversity for Accelerated Development of Savannah Region; the Role of the Youth” will receive hundreds of Gonjas from across Ghana and the diaspora.

Former President Mahama is still loved by his people and always pull crowds to any activity in the the Gonja area and so his presence is expected to pull a huge crowd to Damongo. Even after losing power he received a huge welcome at the 41st Gonjaland Youth Association Congress at Sawla on 15th April, 2017.

Meanwhile a number of activities have been lined up at the Congress beginning tomorrow Friday and ending on Saturday.

Mufti Habibu who is the host of ‘Asansan’ (Welcome) a popular Gonja language programme on Tamale based Sagani TV will premier a documentary titled; “Dramundu” (Let us revisit Olden days) which is

A popular reggae musician Redfyah Kurabaso and other artists will stage a Savannah Peace Concert at the Damongo Lorry Park on the night of Friday 19th April, 2019.

On the morning of Saturday 20th April, 2019, the King and Overlord of Gonja Yagbonwura, Tuntumba Boresa (I), will be conferred with an Honorary Doctorate Degree and Professorship in acknowledgement of his dedication to progress and Development of the Gonja kingdom and the entire country.

The Honorary Doctorate Degree and Professorship would be conferred on Yagnonwura by the Poltava University of Economics and Trade in Ukraine (PUET) at a Special Congregation at the Jakpa Palace in Damongo and would be attended by all the Paramount Chiefs of Gonja Traditional Area as well as sons and daughters of the land.

On the same Saturday 20th April, 2019 at 10:00am, a durbar to be attended by former President John Dramani Mahama will climax activities at the Gonjaland Youth Association Congress.