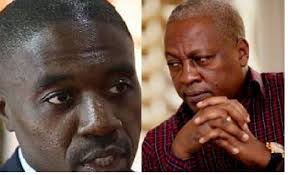 A former Consul General to Dubai under former president John Dramani Mahama, Daniel Osei has once again lampooned his former boss, describing him as someone who cannot win power for the opposition National Democratic Congress (NDC) ever again.

‘’I asked Julius Debrah (Former Chief of Staff) a year ago, when he tried to get me to support Mahama’s comeback, to convince me with 3 reasons why he thinks Mahama can win 2020. I told him I don’t dislike Mahama, and that I only wanted us to win 2020 and needed to be convinced he can win if he became flag bearer. JULIUS COULDN’T GIVE ME ONE’’ he wrote.

According to him, going into the 2020 elections, the NDC must go back to the drawing board and find out why Ghanaians booted out Mr. Mahama and the NDC and brought in the ruling New Patriotic Party (NPP).

He said ‘’we need to reflect on the realities and facts of 2016 and ask what has changed, that guarantees we will win with Mahama in 2020. Nothing has changed. The electorate sacked Mahama with emphasis and he lost with the worst record ever. The electorates were fed up and wanted change. We were accused of corruption, incompetence, nepotism and much worse. They wanted change. The only option was the NPP’’.

Mr. Osei Continued ‘’remember Amissah Arthur’s widow’s speech at the funeral and Mahama’s face? She was talking to Mahama and the nation, in particular Central Region heard her loud and clear. They remember. We cannot overlook the context within which Mahama lost votes and seats in his home region, Northern region. It’s bad enough that Mahama was the first sitting president to lose votes in his home region in his re-election bid, but the factors which caused that loss remain unresolved and returning him will be an insult to the good people of the North’’.