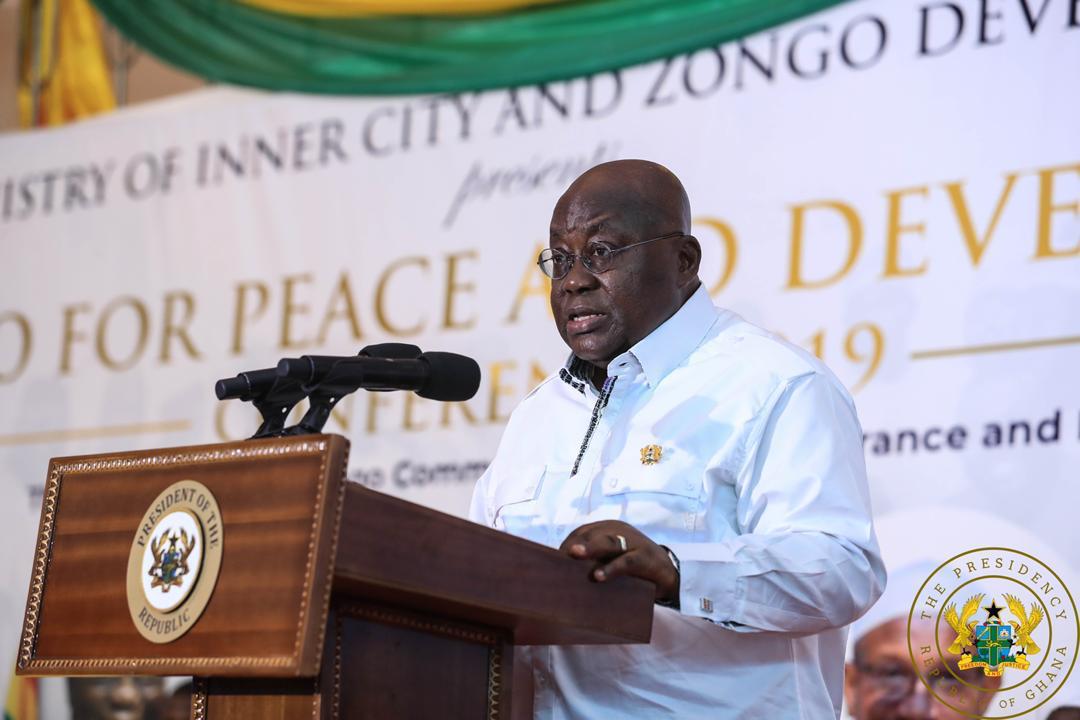 President Nana Addo Dankwa Akufo-Addo has bemoaned the anti-peace and anti-violent tag associated with residents of zongo communities in the country.

According to him, he has lived and continues to live in Nima, a typical zongo community in Accra and would not accept such tags on him and his fellow residents.

“I live in Nima, and I refuse to accept the “anti-peace/violent” tag associated with residents of Zongos. That is not, and cannot be true. I have lived at peace with my neighbours in Nima for decades, stretching back to the days of the early period of my youth in my father’s house” he said.

Speaking on the theme,“Building our Zongo Community through tolerance and peace” at the maiden edition of the Zongo for peace and development conference held in Kumasi yesterday, January 8, 2019, the President noted that good intentions and the desire for development will come to naught if citizens do not strive for peace in their communities.

“That is why Cabinet has endorsed the proposal by the Inner City and Zongo Development Ministry for the activation of ‘Zongo for Peace and Development Initiative. This Conference, the first in the series, is testament to that fact,” he added.

Without peace, the President noted that, Government cannot activate the processes that will lead to an improvement in the living standards of Zongo residents, adding that injustice or a sense of injustice can trigger frustration in people, and result in violence or violent behaviour.

President Akufo-Addo assured that Government will continue to partner Zongo communities in order to bring progress and prosperity to their residents, noting that residents of Zongo communities, in the run-up to independence and up to about a decade after independence, were the natural allies of the Danquah-Dombo-Busia political tradition.

Determined to sign a new pact between the New Patriotic Party and residents of Zongo communities, the President added that “We must not let the toils of Amadu Baba and Othman Lardan, which earned them deportation to Nigeria by Kwame Nkrumah’s CPP government, go to waste. They sought partnership with the Danquah-Dombo-Busia tradition, precisely because they believed that this is the partnership that will bring development to the Zongo communities.”

2019, President Akufo-Addo added, promises to be a good year for development in our Zongo communities.

“I urge you to give the Zongo Minister, an ardent champion of the potential of residents of Zongo communities to chart a path of progress and prosperity for themselves, the maximum co-operation and support, so that, together, we shall improve the living conditions of all our people,” he said.