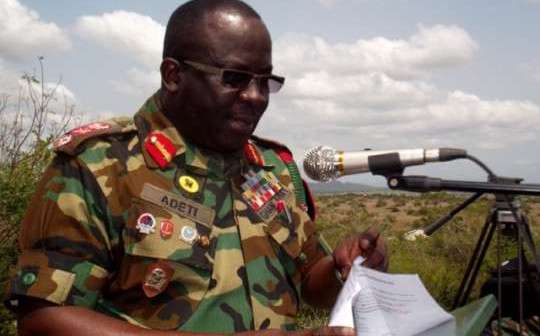 The ruling New Patriotic Party (NPP) Member of parliament for Assin Central Constituency in the Central Region, Kennedy Ohene Agyapong has revealed that newly appointed security coordinator for the John Mahama campaign, Major General Sampson Adeti almost threw the country into chaos when he initiated moves that neatly prevented the then ruling National Democratic Congress (NDC) from handing over power to the elected NPP government.

According to him, Major General Adeti who was then the Army Chief of Staff at the time, sanctioned the use of very dangerous and deadly weapons, some of which could penetrate into armored vehicles, but was stopped by Air Marshall Michael Samson-Oje who was the Chief of Defense Staff at the time.

‘’But for Samson-Oje, the NDC would not have relinquished power. But I can tell you that they are victimizing the soldiers who helped us win the 2016 elections. And the kind of bogus appointments going on there, we must be very careful. It seems the Domonic Nitiwul (Defense Minister) is oblivious of how we came to power. We didn’t just get power, we used these people if you don’t know I am telling you Dominic Nitiwul’’ he said on a local television station in Accra and monitored by BestNewsGH.com

He alleged that the military high command was still appointing loyalists of the retired Army Major General and that it will be detrimental to the course of the ruling party if they are made to consolidate their networks within the ranks of the Army.