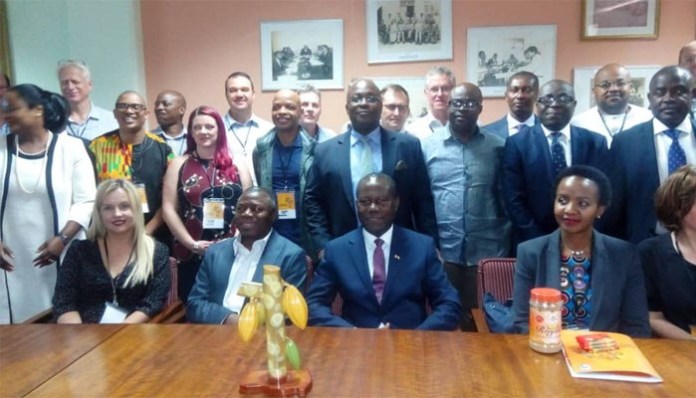 Executives of the Standard Bank Group have visited the Chief Executive of the Ghana Cocoa Board (COCOBOD), Joseph Aidoo Boahen.

The Executives were at his office on Tuesday, May 28, 2019, in Accra, to among other things, learn about the operations of the Ghana cocoa sector as well as to find out ways in which the Bank can “drive Africa’s economic growth.”

Standard Bank is one of the banks that contribute annually to the syndicated loans that Ghana Cocoa Board seeks for its pre-export financial support which is used for buying cocoa seeds.

Issues of interest to the Bank’s executives during the meeting included the governance structure of COCOBOD and how that affects the overall success of the cocoa sector.

Discussions during the meeting also centered on the future of the sector.

It emerged during the meeting that the Standard Bank Group supports the cocoa sector to the tune of about $600 million yearly through the Licensed Buying Companies.

Mr. Aidoo Boahen, during the meeting, took time to highlight the operations of the cocoa sector in Ghana.

He also briefed the Standard Bank officials on Ghana’s contributions to world cocoa production annually and the financial gains it makes.

According to him, Ghana was second to Cote d’ Ivoire in terms of top cocoa producing nations in the world.

Mr. Aidoo Boahen indicated that currently, Ghana was producing about 900,000 metric tonnes of cocoa yearly, translating to about $2 billion revenue.

He bemoaned that revenues that accrue to Cote d’ Ivoire and Ghana annually was around $6 billion, an amount he believed was very low considering the fact that the world cocoa market was valued at an estimated $100 billion.

According to the Chief Executive, the low revenue was forcing some farmers to sell off their farmlands to illegal gold miners, a development he says was a threat to the survival of the cocoa industry.

Aside the “global price shocks” that affect cocoa farmers, Mr. Aidoo Boahen told his guests that climate change was also posing a major worry for the sustainability of the sector.

He disclosed that productivity of cocoa was so low in Ghana and as a result, Government has had to subsidized fertilizers to farmers.

Deputy Chief Executive of COCOBOD in-charge of Operations, Dr. Emmanuel Opoku, in a presentation, indicated that there were about 800,000 households engaged in cocoa farming in Ghana.

He noted that cocoa was the primary source of income for many people in Ghana.