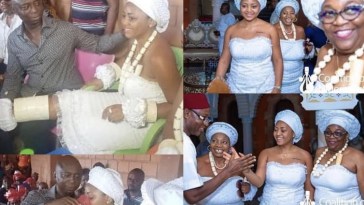 A man identified as Jude Ojeogwu who claims to be the father of Nollywood teen actress Regina Daniels has stated that he is not happy with his daughter’s decision to marry one of their country’s billionaire Ned Nwoko.

According to Mr. Ojeogwu, she named Regina Daniels after his mother and that the actress full name is Regina Daniels Ojeogwu and also added that he has no idea of the supposed marriage of her daughter and Ned.

He went on further and blamed the actress’ mother Rita Daniels as being the mastermind behind the whole marriage and warned her that she was treading on dangerous grounds and he wishes that she would retrace her steps.

However, nothing showed that she was going to change her mind.

A few days ago, some pictures surfaced on social media of the actress going through Otu-Udu womanhood rites but her alleged father claims the initiation was wrong.

Talking about his daughter’s husband, he revealed that Ned Nwoko was 62 and not 59 as they both grew up in the same compound as young boys. He added that he spoke to Regina earlier and warned her and also told her about what she was getting into but Regina advised that it was her mother’s decision and that Ned Nkowo is a fine gentleman and she loves him.

He also stated that despite not paying Rita Daniel’s bride price, he has been very responsible for the financial support of all his 4 kids with Rita and that the 2 boys lived with him until recently when the mother advised they move in with her into her new home.

He also stated that as it stands there is only Little he can do as Regina and her siblings belong to Regina’s great-grandmother as per tradition.

“Regina daniel Ojeogwu is my biological daughter.What ever is ongoing is not to my knowledge and without my consent.The fact speaks for itself looking at the picture. Her mother Rita daniel is threading on a dangerous path and I hope she will retrace her steps. Even the initiation ceremony into otu odu appears completely strange to Regina daniel Ojeogwu. Regina is from ogwashi uku and not from olor as being rumored. All the opportunities for Mr Ned nwoko to discuss with me proved abortive not realising that we once lived in the same house in awoyokun street, onikpan, Lagos. The implication of all this is that she impregnated herself. The name Regina was my late mother’s name. I have tried to exercise restraint but Regina’s mother kept pushing me to the wall. Am alive and not dead. If in doubt of this post call Barrister Jude Ojeogwu on 08033039058”