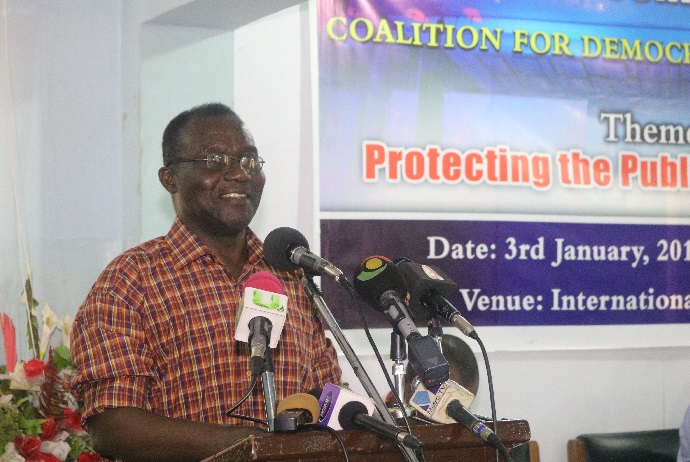 The Caucus for Democratic Governance Ghana (CDG-GH) has described president Nana Addo Dankwa Akufo-Addo’s posturing and body language at the recently held presidential media encounter as reflecting disrespect for the generality of the Ghanaian people.

A statement issued by the pressure group and signed by its convener, Dr. E. K Hayford berated the president for lacking decorum on the day of the media encounter.

Again, they said the president’s responses showed his lack of understanding and appreciation of issues culminating in his decision to refer the questions to the sector ministers for answers.

‘’ The CDG-GH views the media encounter as shambolic, deceptive, a diversionary tactics from the numerous corruption been perpetuated by the President and his NPP government on the good people of Ghana and a total waste on the state coffers’’ the statement further averred.

NANA ADDO`S ENCOUNTER WITH THE MEDIA : A TOTAL FIASCO OR A GENUINE ATTEMPT TO ADDRESS ISSUES ?

In 2017 the President had two similar Press encounters, where his abysmal performance showed his limited understanding of issues in question. More often than not, questions thrown at him were referred to his Ministers and Vice President, who were caught unaware.

In yesterday`s ( Wednesday, 19th December 2018) encounter, the President came thirty minutes (30 min ) late ; a care less attitude  which demands apology by the good people of Ghana from the president .  Pretending to be busy invariably “about nothing” the President did a monologue that took nearly 40 minutes. The encounter saw the shortest time allocation for media questions. Only Fifteen (15) out of seventy potential questions were allowed from the media, many of them pooly answered by the president and his appointees.

For the greater part of the media encounter, the President showed little or no knowledge about specifics of daily governance, and so had to call on his ministers for rescue . Surprisingly he appeared not to have any knowledge about issues on the Ghana Medical Store Fire Investigation; a national catastrophe which must have appeared in the hand over notes from  former Presidednt John Mahama and the NDC goverment. As usual of the president, critical national issues which demanded answers were quickly sensored making sure that no questions were asked which could expose  his lack of competence.

The CDG-GH views the media encounter as shambolic , deceptive, a diversionary tactics from the numerous corruption been perpetuated by the President and his NPP government on the good people of Ghana and a total waste on the state coffers.

The President was badly in a hurry and said he wanted to end the barricade of questions at seven (7pm). The fear of answering questions on the growing incidence of corruption in his government the shielding of his corrupt appointees and Ministers, the macroeconomic indicators which does not reflect in the pockets of the ordinary Ghanaian ; had so scared him, and was forcing him to call for the end of the programme to the disappointment of many invited Journalist.

The CDG-GH would like to remind the President, that without the people he would not be President. He should therefore prepare adequately during such future Media encounters in other to preserve the diginity of the high office of the presidency and save the nation from any future embarrassment.