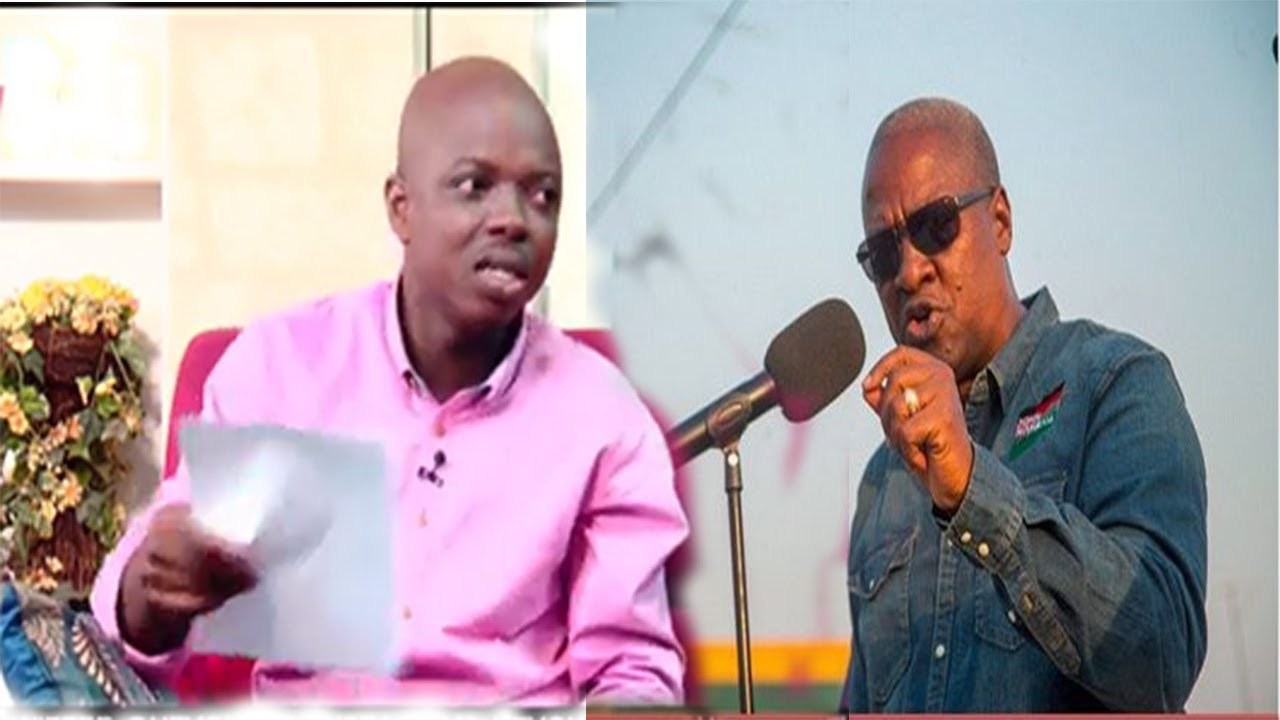 Acting ruling New Patriotic Party (NPP) Regional Chairman for the newly created Bono East Region, Kwame Baffoe, otherwise known as Abronye DC has lampooned former president John Dramani Mahama, describing him as someone who has no shred of reputation left on him.

According to him, the opposition National Democratic Congress (NDC) presidential candidate for election 2020 has been ‘washed’ dry by his own former appointees who sees nothing good in him.

Abronye DC’s outburst comes on the heels of a statement issued by the office of the former president and signed by the special aide to Mr. Mahama, Joyce Bawa Mogtari, labeling him (Abronye DC) as a knighted liar, following accusations that the former president had rented an expensive apartment for former HIV/AIDS ambassador, Joyce Dzidzor Mensah abroad as a way of aiding her to escape prosecution for some wrongs she committed against the state.

The Joyce Bawah Mogtari signed statement described Abronye as a ‘knighted liar’ without common sense who goes about peddling all manner of falsehood to ruin Mr. Mahama’s reputation.

“It is a sad testimony, that a serial fibster such as Kwame Baffoe occupies a position of trust such as a Regional Vice Chairman of the ruling party. Such persons debase our political system and are responsible for the continued erosion of public credibility in our democratic dispensation,” Joyce Bawah Mogtari wrote on her facebook page.
But the loudmouth NPP regional chairman will have none of it.

Read full statement below;
I have read with shock and regret a letter signed by one Joyce Bawa (aide to the former president) which has been captioned by Ghanaweb.com with the above title.

Although I was surprised at the tone and intent of the letter, I think my worst fears have been confirmed by the office of the former president that, they still hold no respect for the good people of Ghana because not too long ago, he described Ghanaians as people with short memories and on one occasion, Mahama further described Ashanti’s as ungrateful people and grumbles because according to him, even if he uses gold to construct their roads, they will still not appreciate.

To begin with, I find the press statement from the office of the former president as primitive and simply out of context because the statement failed to address the substance of what I said but rather intended to calumniate my personality.

I was expecting the former president to speak to the matter and rebut the fact that, his wife Lordina Mahama has no connection or whatsoever with Joyce Dzidzor Mensah. Because as it stands now, all fundamentals indicate clearly that, Lordina Mahama instigated and aided Joyce Dzidzor Mensah to present fraudulent documents to the AIDs Commission for her to be appointed as AIDs ambassador even though she did not fall within the prerequisites of the commission.

Also, Joyce Dzidzor herself has publicly stated that, some ministers of the John Mahama administration also played an extensive role together with Lordina to aid her obtain the ambassadorial position even though she knew she was not qualified.

As a well meaning former president, I was anticipating that, John Mahama through his villain shill would dare and challenge Joyce Dzidzor Mensah to mention names of his former representatives and appointees who aided her alongside his wife.

If the former president thinks he is clean and not associated with the fraudulent activities of Joyce Dzidzor Mensah, he should just produce her for prosecution and stop shielding her because I am optimistic the CID will soon arrest her from her John Mahama paid secret hideout and further prosecute her and all her accomplice.
Also, the distorted statement in the first paragraph noted among other things that, I have decided to tarnish the reputation of the former president.

Attached is the report or letter of the Ghana AIDs Commission to prove that, I didn’t lie with the fact that, the lady deceived Ghanaians with fake documentations.

Finally, I would like to state clearly that, the insults from the office of the former president will not stop me from exposing the wrong and smelling deeds during his administration because I am a citizen not spectator.
……Signed……
Kwame Baffoe Abronye