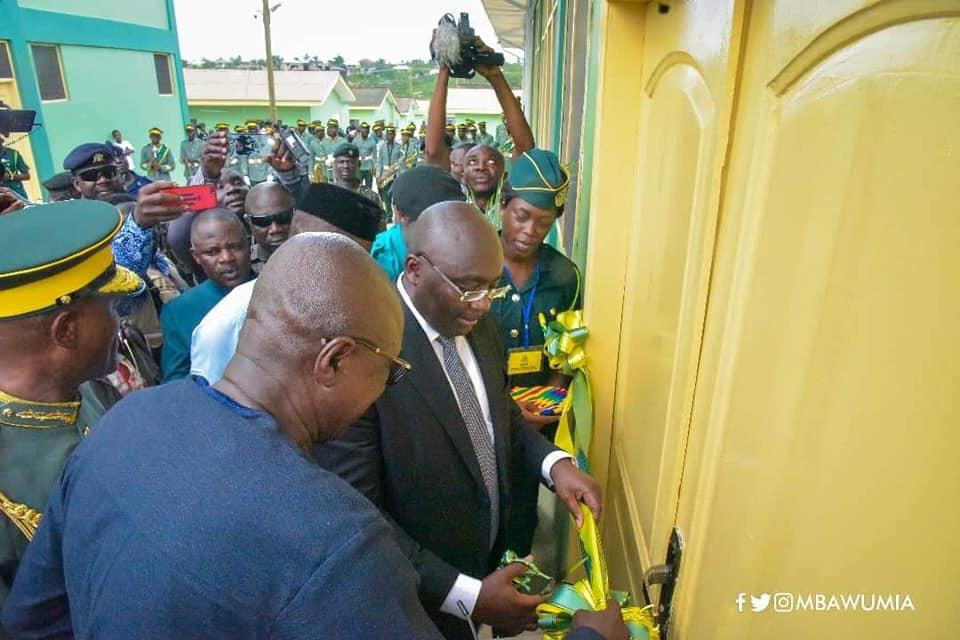 The Vice President of the Republic, Dr Mahamudu Bawumia has, on behalf of President Nana Addo Dankwa Akufo-Addo, commissioned a number of projects at the Ghana Immigration Service Academy at Assin Foso in the Central Region.

The projects were undertaken in fulfilment of a promise by President Akufo-Addo to revamp the structures of the school to upgrade it to an International Academy for the sub-region, when he reviewed the Graduation Parade of the 9th Cadet Intake on 25th October, 2017.

Delivering the Reviewing Officer’s Address on behalf of the President at the Graduation Parade for the 11th Cadet Intake at Assin Foso on Monday, 29th April 2019, Vice President Bawumia said the significant revamping and construction works undertaken in the ensuing period lends credence to the fact that when President Akufo-Addo promises, he delivers.

“Today, history has been made again. We have commissioned, a 221-capacity hostel facility and a 300-capacity lecture hall for the Immigration Academy.  The training school has also been upgraded with a 280 capacity hostel as you have all witnessed today”.

“Ladies and Gentlemen, when the President promises, he delivers! Kindly join me to commission a modern drill square – ‘The Academy Square,’ where we are now,” he declared to loud cheers from the graduants.

The revamping and upgrading of the Academy, as well as the provision of essential logistics for not just the Immigration Service but all other security agencies form part of a holistic national effort to improve upon their human capital and effectiveness, Vice President Bawumia explained.

“Government is determined to rid the country of all types of crimes. To this end, the President has resolved to resource all the security services to enable them enforce the law. Recently, government provided vehicles and other facilities to the Ghana Armed Forces and the Police Service. Government has also procured 150 high performance vehicles to support the operations of the Ghana Immigration Service.

“Let me indicate that the Government will not be complacent in the security management of the country. We are alert and working to ensure that citizens, indeed all of us, are safe and continue to go about our activities without fear. Government is thus committed to ensure the full implementation of the Immigration Service Act, 2016 (Act 908) which is aimed at injecting more efficiency and effectiveness into the Service” Vice President Bawumia stated.

Vice President Bawumia urged the 300 graduating officer cadets to be “fully committed to the cause of the country and exhibit high levels of integrity, and, let me stress, eschew all forms of corrupt practices in the performance of your duties.”

He added, “From here on it is your primary responsibility and commitment to hold unto the virtues and high standards of discipline imparted to you.”