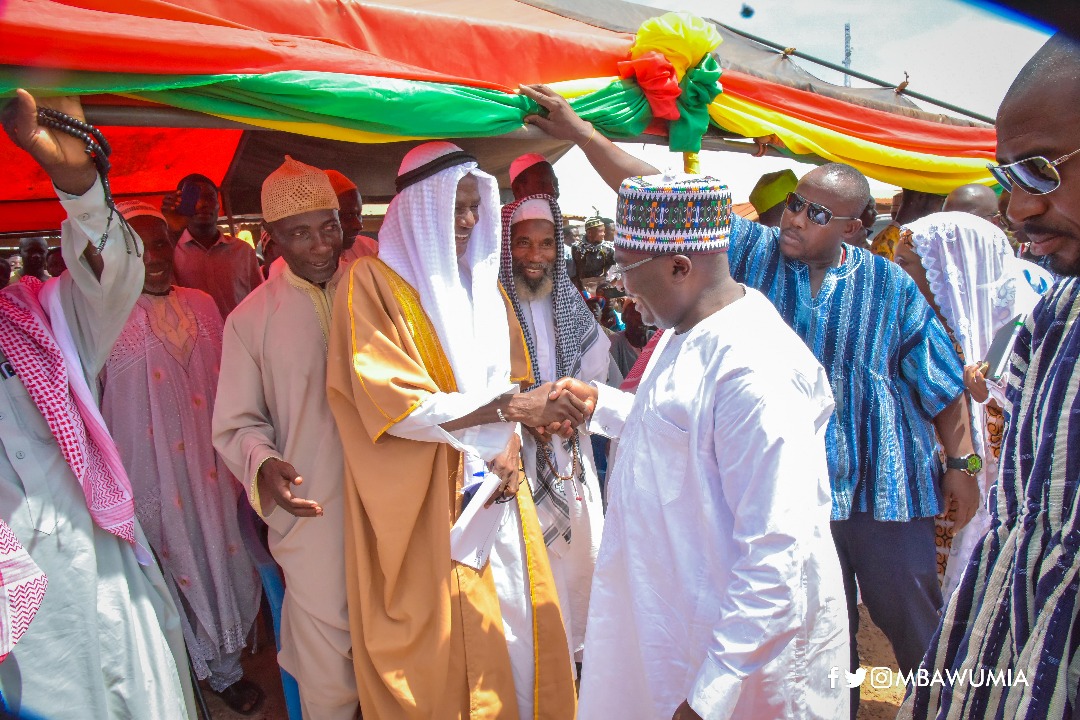 The Chief Imam for Suaman District in the Western North Region, Alhaji Mumuni, has urged his fellow Muslims and Zongo dwellers to disabuse their minds of the perception that the NPP is anti-Muslims and Zongos.

According to him, the various policies and programmes being implemented by the Akufo-Addo government specifically tailored for Muslims and the Zongo communities bear testimony to the fact that the party likes Muslims more than they were made to believe in the past.

Alhaji Mumuni explained the turnaround in perceptions about the NPP when the Vice President of the Republic, Alhaji Dr Mahamudu Bawumia, joined the Muslims of Dadieso to pray as part of this year’s nationwide Ramadan Tour on Sunday, 19th May 2019.

Flanked by two of his deputies, Alhaji Mumuni said then-candidate Nana Akufo-Addo promised in the lead up to the last general elections that if voted into office, he would show that the NPP does not dislike Muslims, contrary to the propaganda being pushed by the party’s opponents.

“In the past, the people of Dadieso Zongo, including me, did not want to hear the name NPP. We were told that you didn’t want to associate with us, that you didn’t like Muslims and Zongos and if we come around you will drive us away. We were afraid of the party. But since Nana Akufo-Addo came he has really done a lot to bring all of us together and shown that NPP loves Muslims.”

“In 2016, when President Nana Akufo-Addo came to campaign, I stood here and told him that we Northerners and Muslims don’t really like NPP because of what we have been told. But since Nana Akufo-Addo won the election he has really shown that he loves Muslims and Zongos”.

The District Imam had high praise for the District Chief Executive for Suaman, Hon Christian Baah, and government for the diligent implementation of the government’s policy directives for Muslims and Zongos in the district.

“Until two years ago, we didn’t even know that although Government is in Accra, it still thinks about us at Dadieso. Over the past two years, this Government through the DCE has helped three people to go to Hajj. We are most grateful. Nana Akufo-Addo and NPP have shown that they really care about Muslims. We are grateful to Nana Akufo-Addo and Dr Mahamudu Bawumia. May Allah continue to bless them.”

Vice President Bawumia urged Muslims to pray for the sustenance of the peace and acceptance of religious diversity Ghana enjoys, and contribute their quota towards nation building.

He has been accompanied by the Minister for Inner Cities and Zongo Development, Hon Dr Mustapha Abdul-Hamid; Minister of State at the Office of the Vice President, Hon Boniface Abubakar Siddique; national Nasara Coordinator of the NPP, Aziz Haruna Futa; the Registrar of the Pharmacy Council, Pharm (Dr) Audu Rauf, officials of the Zongo Development Fund, and a number of Muslim MPs including Hon Fuseini Issah (Okaikoi North) and Hon Halidu Ali Maiga (Dormaa West).