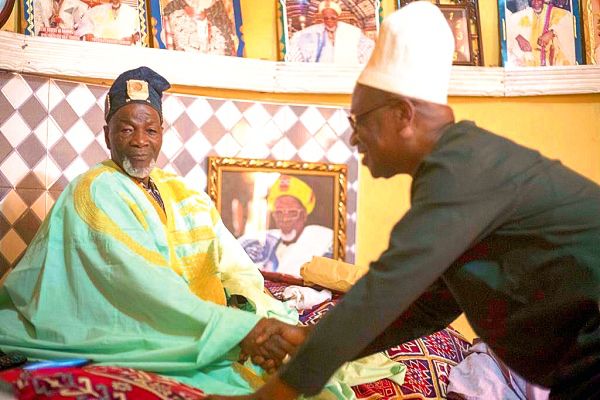 The overlord of the Dagbon Traditional Area, Yaa Naa Abukari Mahama II is calling on government to ensure that oil revenues accruing to the country benefits all the communities in which the resource is found.

In his estimation, this will help aid in the rapid development of communities in which the resource and found and ensure that the entire country also benefits from it.

Yaa Naa Abukari made the call when the Chief Executive Officer of the Ghana National Petroleum Corporation (GNPC), Dr K.K. Sarpong, paid a courtesy call on him at the Gbewaa Palace in Yendi last Friday.

The GNPC boss congratulated the Yaa Naa on his ascension to the Yani Skin and also briefed him on progress his outfit was making in the exploration of crude oil in the Northern, Savannah and North East regions.

Yaa Naa Abukari expressed appreciation to Dr Sarpong for the visit and entreated him to ensure that the corporation engaged chiefs in their activities in the area to keep them abreast of issues about the oil find.

Dr Sarpong said exploration of oil in the area was being pursued with high hopes of discovery in commercial quantities for national development.

The three regions, which form about 52 per cent of the onshore Voltaian Basin that stretches across 104,000 square kilometres (km2) of land, is believed to be a potential hub of commercial quantities of oil.

He said the first part of the process towards exploration had been completed.

“The first stage that we set out during the two-day seismic survey is completed. We are interpreting the results in China after that we will decide on what to do next by covering the areas of prospects with a three-day survey this year,” the chief executive indicated.

While commending the Yaa Naa for providing the necessary support to the corporation for the commencement of the exploration exercise last year during his tenure as the Yoo Naa (Chief of Savelugu), he appealed to chiefs in the area to cooperate with the government in its oil exploration efforts.

The GNPC last year began the exploration of oil in the then Northern Region.

About 16 districts are said to have huge potential of the natural resource that is yet to be harnessed.

President Akufo-Addo in his State of the Nation Address (SONA) in 2018 announced that a pilot survey in the Voltaian basin for possible onshore discovery had established the presence of a working petroleum system.

The announcement followed a directive the President gave in July 2017 to the GNPC to pay particular attention to the onshore oil potential which appears to be yielding dividends as the corporation had begun prospecting for oil in the Voltaian basin.