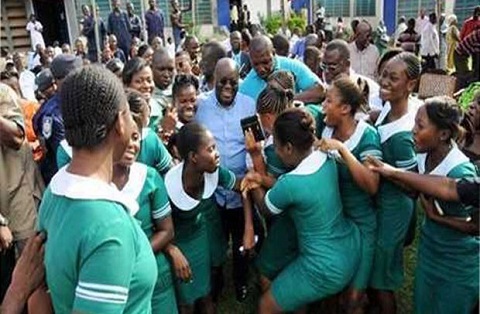 President of the Coalition of Allied Health Professionals, Bright Bell says trainee nurses in the country whose allowances have been in arrears for between 3 and 5 months have regretted buying into then candidate Akufo-Addo’s promise to restore their allowances, prompting them to vote for him and the ruling New Patriotic Party.

Speaking on Accra based okay Fm and monitored by BestNewsGH.com, Mr. Bell opined that their membership’s plan for the academic calendar has been distorted as a result of the failure of government to pay the allowances promptly, explaining that because they hinge their financial plans on the monthly 400 cedis in the case of trainees and the 700 cedis for those on rotation, they end up being referred in some of their courses.

He said the nursing trainees had indicated the readiness to pack bag and baggage and join the leadership of the coalition in Accra so they could picket at the jubilee house to show how serious they are.

‘’We were happy when then candidate Nana Akufo-Addo and his vice Dr. Mahamudu Bawumia promised the restoration of our allowances. We joined in and sang the hallelujah chorus which brought the party to power. But the government is not walking the talk and most of us or becoming despondent. Infact some of us have regretted’’ he said.

Mr. Bell alleged that the school fees of nursing trainees has been increased, further exacerbating their already precarious situation, warning that government must take steps to address their grievances in order to avert a massive demonstration in the coming days.

Meanwhile the deputy Minister for information, Pius Enam Hadzide has announced that government has released some 35 million cedis to effect the payment of the nursing training allowances.

He said the Controller and Accountant General has released the amount and that the remaining 25 million, making the total of 60 million cedis paid monthly to the nursing trainees will be released later in the month.