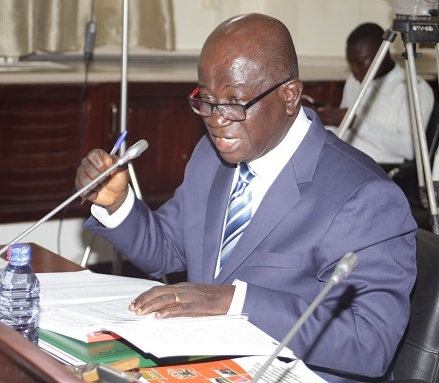 The Controller and Accountant General, Eugene Ofosuhene says his department has cleared off all ghost names that existed on public sector payroll.

According to Mr. Ofosuhene Ghana’s coffers for a long time has suffered a lot; losing huge portions of its revenue as a result of waste and leakage through the existence of ghost public sector workers and the activities of some individuals who engineer the existence of the ghost workers.

Mr. Ofosuhene was speaking in Bolgatanga when he paid a working visit to the Upper East Region.

He had a meeting with some Finance and Account Officers in the various District and Municipal Assemblies in the Region to listen to their challenges at first hand and to commend them for their roles in clearing the ghost names off the public sector payroll.

Mr. Ofosuhene hinted that the introduction of the Electronic Salary Payment Voucher system of paying public sector workers has contributed greatly to the exercise adding that the government agency intends to continue with the system to ensure that, the ghosts names do not reappear on the payroll.

The Controller and Accountant General also mentioned the introduction of another system known as the Ghana Integrated Financial Management Information System, which is currently being used in the various Metropolitan, Municipal and District Assemblies across the country, as a way of preventing leakage of revenue and other corrupt practices in the Public Sector.

Staff of the Controller and Accountant General’s Department who attended the meeting pleaded with Mr. Ofosuhene to ensure that the issues with their promotions are addressed as quickly as possible, since many of them have stayed in the same position for years without promotion.

Bolgatanga Municipal Assembly’s Finance Officer, Alhaji Sheriff Adam who spoke on behalf of the staff said he for example has stayed in the same rank for close to seven years, and thinks that is discouraging.

“We have been here with other public sector workers in other departments; some of them have had more than one promotion and we with the Controller and Accountant General’s Department are still where we are. This is not good and has to be addressed.”

Earlier, Mr. Ofosuhene called on the Upper East Regional Minister, Paulina Abayage, where she disclosed that some foreign investors from Australia and America have expressed interest in the
Pwalugu Tomato Factory and the Zuarungu Meat Factory.

If these factories are revamped, there will be more jobs available to absorb the many youth in the region.