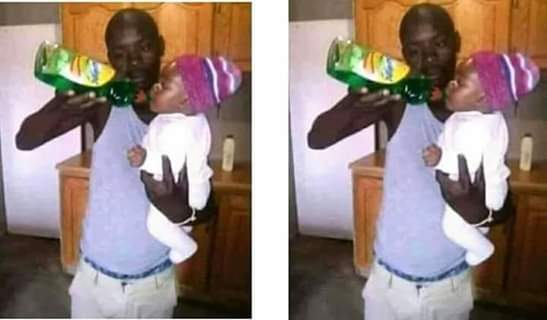 A Youngman is in the grips of law enforcement agencies in Lusaka Zambia after he was caught on Closed Circuit Television (CCTV) feeding his toddler niece with dish washing liquid soap.

Jeffrey Mwale has been taken to the police by his In-law after he was caught on the camera feeding his niece with sunlight liquid soap in Lusaka’s Meanwood area.

It is believed Jeff has been feeding the niece with harmful things in the name of food whenever he gets the chance, culminating in the baby frequently falling sick.

The parents to the child heard rumours from the house maid on how he treats their child and decided to put up CCTV Cameras in their apartment in order to see exactly what happens.

On Wednesday, April 3, 2019, Jeff was caught on camera after they left him with the baby deliberately for just 30 minutes.

He has since claimed he does not like the wife his elder brother married, that she’s a witch and the children she’s bearing are all witches.