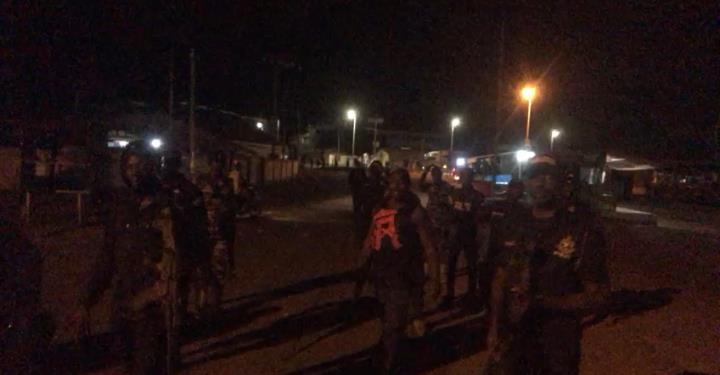 The Upper West Regional Police Command was attacked on Wednesday evening by hundreds of irate youth demanding the release of the three persons arrested for their alleged involvement in the public flogging of the two persons whose leaked sex video went viral on social media.

The youth went on a rampage, pelting the facility with stones and burning tyres to demand the release of the suspects.

Multiple reports indicate that it took over one hundred police personnel to ward off the youth with tear gas and warning shots.

The three suspects including two sub-chiefs of the Wala Traditional Council allegedly gave consent for the public flogging of the two.

The suspects are Sidiki Osman, 62, Bushiran Khigir, a 34-year-old mobile phone repairer and Issahaku Mahama, a 70-year-old farmer and the Doho Naa.

They were arrested with the support of the Wa Naa and some community members.

The Police are pursuing the remaining suspects.

Three clips of the couple engaging in sex acts were shared on social media and have since gone viral.

The couple were on Monday picked up by some residents over the videos and given twenty lashes each in public at the forecourt of the Wa Naa’s Palace on Tuesday (May 31, 2022).

A video of the flogging was also widely circulated on social media prompting widespread condemnation.