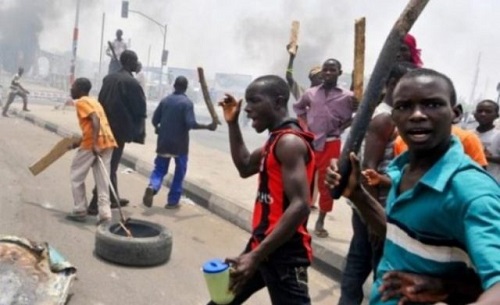 “Participation in the activities of a political party vigilante group with an offensive weapon is an offence under the Bill for which the penalty is a term of imprisonment of not less than ten years and not more than twenty-five years”, Clause 3 of the Bill in part read.

This came to fore when the Vigilantism and Related Offences Bill, 2019, was laid and read the First time on the floor of the Parliament on Thursday.

The Bill was laid on behalf of the Government by the Minister for Justice and Attorney-General, Gloria Akufo and was referred to the Committee on Constitution, Legal and Parliamentary Affairs by the Speaker, to consider its urgency or otherwise and report same to the plenary for consideration.

The Bill has the sole purpose of disbanding political party vigilante groups and proscribe acts of vigilantism in the country.

The move, was in fulfillment of President Nana Addo Dankwa Akufo-Addo’s pledge and commitment to disbanding political party vigilante groups in the country.

However, the laying of the Bill attracted divided opinions from both sides (Majority and Minority) of the House.

The Minority Leader, Haruna Iddrisu, argued that the certificate of urgency under which the Bill was brought to Parliament was unnecessary, insisting that it should rather go through the normal processes for the enactment of a law.

The deputy Majority Leader, Sarah Adwoa Safo, on the hand said, the determination of the urgency of a Bill doesn’t lie in the mouth of the Speaker or the Minority Leader but rather the Committee.

Memorandum
The object of the Bill is to disband political party vigilante groups and proscribe acts of vigilantism in the country.

The unfortunate incidents of politically-related and motivated violence has led to the formation, organization and promotion of “vigilante” groups associated, connected or affiliated with political parties in the country.

The phenomenon of politically-related violence threatens Ghana’s fledgling democracy and the rule of law. Consequently, there has been widespread revulsion and condemnation expressed by the public in the aftermath of the Ayawaso West Wuogon by-election of 31st January, 2019.

This led the President of the Republic to appoint a Commission of Inquiry, within a week of the occurrence of the unfortunate event, to investigate the matters that led to those events and make recommendations.

While the Commission of Inquiry was still sitting, the President, during his Message on the State of the Nation delivered on 21st February, 2019, encouraged the leadership of the two main political parties, namely, the New Patriotic Party and the National Democratic Congress, to come together to bring an end to this phenomenon of political party vigilantism.

Failure to comply with the requirements of the notice is an offence under the Bill punishable by a term of imprisonment of not less than five years and not more than fifteen years. The Minister is required under the Clause to publish in the Gazette, a list of the disbanded political party vigilante groups within three months of the coming into force of the Bill.