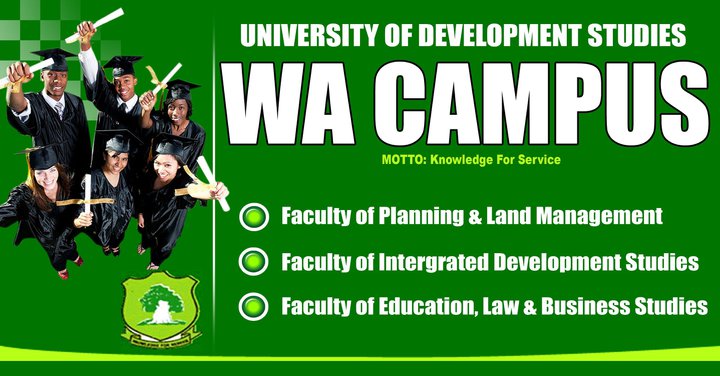 The concerned citizens of the Upper West Region have commended president Nana Addo Dankwa Akufo-Addo for announcing an autonomous status for the Wa Campus of the University for Development Studies (UDS).

At a press conference to show their appreciation and inform the generality of the Ghanaian people of their resolve to follow the announcement through to its implementing stage, the group said the president has made history by the announcement, adding that the decision was bold and courageous.

“We are proud of His Excellency Nana Addo because he is a great history maker”. The declaration of the UDS Wa Campus’s autonomy is indeed long overdue. Mr. President we salute you!’’ they said.

According to the group, it is imperative that all stakeholders work at ensuring the concretisation of the announcement which will give birth to the University of Business and Integrated Development Studies (UBIDS).

‘’We want to call on His Excellency Nana Addo to press on the Attorney General to quicken action so that Parliament can pass the bill into law establishing for the people of the Upper West Region, an autonomous University.’’

The group also paid homage to past presidents, Jerry John Rawlings, John Agyekum Kufuor, John Evans Atta-Mills and John Dramani Mahama for the various roles they played in the life of the University, culminating the decisive pronouncement by president Akufo-Addo.

They thanked traditional authorities in the region for the inspiration and support during the struggle for autonomy, but gave political leaders in the region the chance to redeem their image.

See the full text of the statement as read at the press conference today.

It is with great joy and act of truism that we invite you all to this morning’s press briefing. Ladies and Gentlemen, 10th November, 2018 will remain a memorable day in the history of Upper West Region……. The bold and courageous announcement made by His Excellence Nana Addo Dankwa Afuffo Addo the President of the Republic of Ghana at the 19th graduation ceremony of the UDS held at Tamale, as he hinted cabinet approvals for UDS- Wa Campus as the  University of Business and Integrated Development Studies is a strong demonstration of good leadership; victory for citizens rights and above all expanding access to quality educational opportunities at all levels.

We wish to express our warmest appreciation to His Excellency for responding to the clarion calls of the people of the Upper West Region to grant the UDS Wa Campus autonomous status, especially after the Dr. Christine Amoako Nuamah Committee made recommendations amongst others for autonomy for the Wa and Navrango campuses. It is our hope that “His Excellency will be a successful president to all Ghanaians” we owe you (your Excellency) our heartfelt thanks and appreciation. The Journey has been so tiring and last two week’s demonstration suggests that; we the people of the Upper West Region and sympathizers are more united than we thought.

Fellow colleagues “We are proud of His Excellency Nana Addo because he is a great history maker”. The declaration of the UDS Wa Campus’s autonomy is indeed long overdue. Mr. President we salute you!

We equally owe a lot of gratitude to the Waala Traditional Council for giving as their blessing and support to pour out in the streets of Wa to demand for the autonomy.

We cannot celebrate the victory without expressing appreciation to Ambassador Alhaji Shahanu Mugtari who laid the foundation for the establishment of UDS Wa Campus in 2002 now University of Business and Integrated Development Studies.

Also, to our legal team, you have won the hard fought battle. We are grateful for your show of solidarity and high sense of patriotism. We are proud of your intellect.

To our dear Media we salute you for your act of professionalism. You have been in the struggle with us and your contribution to this victory is supernumerary.

We have been in this struggle with our market women, trotro drivers, political sympathizers, and young men and women within the Upper West Region. We appreciate your unflagging support.

We wish to pay homage to Former President Jerry John Rawlings for the establishment of UDS in Northern Ghana. Today your vision of empowering the people of Northern Ghana is highly remarkable.

The List of thanks cannot go without the mention of Former President John Agyekum Kufour, in whose tenure the Wa Campus was established.

To our late former President His Excellency Prof. John Evans Fiifi Kofi Atta Mills commitment to expanding the infrastructural needs of the Wa Campus, in view of the multi- purpose library complex facility, though still under construction.

The journey to the attainment of autonomous status was occasion by the Former President John Dramani Mahama who set up the 10 member committee to look in to the matter today the committee’s findings have been appreciated. We say big thank you for your impressive contribution. In the near future, it is appropriate to honour these former heads of state for their strong historical connections with UBIDS.

Ladies and Gentlemen, the quest for autonomy will not end now. The  journey has just began. We want to call on His Excellency Nana Addo to press on the Attorney General to quicken action so that Parliament can pass the bill into law establishing for the people of the Upper West Region, an autonomous University.

Comrades, the Concerned Citizens of the Upper West Region and Sympathizers of UDS Wa Campus will not relent in the effort to ensure that; the President’s important announcement of significant value will not be rhetoric.

Colleagues and the media; we are urging the managers of UDS to ensure that, the uncompleted projects should be given considerable attention since infrastructural needs will be a major pillar in the smooth running of the University of Business and Integrated Development Studies (UBIDS).

We still remain focused and committed to ensure that saboteurs’ will not succeed in their schemes to run down the Wa Campus now declared as UBIDS in their realignment and staff rationalism agenda. We will fight to ensure it will never happen.

To the Vice Chancellor who said over his dead body will Wa campus attain autonomous status in his stewardship, we want to find out; if he is now dead so that we can offer our condolences to the bereaved family……

We also want to urge the Principal of Wa Campus Prof. Alhassan Aminu to begin to ensure that major infrastructural projects will be prioritized to cater for the office of a Vice Chancellor for he said “the Wa Campus now UBIDS in due course doesn’t have an office for a Vice Chancellor”.

To the MPs of the Upper West Region, you have another opportunity to redeem your image. Please ensure that your colleagues eschew any partisan approach to debating the bill. You must be guided by the yearning demand of those who entrusted you to represent them. Our dear Honourable MPs, we are watching you people closely. Do your best to expedite the passage of the rectification bill.

Ladies and Gentlemen we must exercise caution and remain focused in order to realize the dream of salvaging UDS Wa Campus now declared as UBIDS.

We are making a passionate appeal to our Law makers (Parliamentarians) not to play petty party politics and unnecessarily delay the bills when it is finally laid before the house.

We express regret to those political activists who seek to make political gains; they should shut up. It is for the good course of the Upper West and Ghana at large. We reiterate that the power struggle and  quest for glory will not serve any good.

Ladies and gentlemen, the media; we thank you all for coming.

Long live the dream of UBIDS!