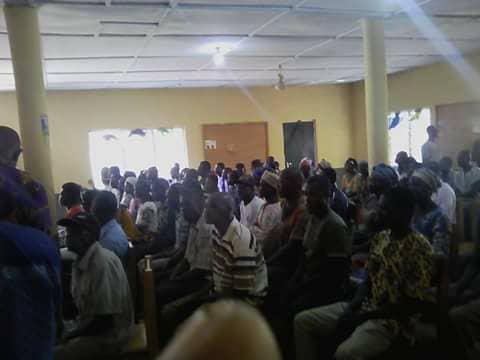 The Upper West regional chairman of the ruling New Patriotic Party (NPP) SB Kangberee has come under fire for suspending the Nadowli/Kaleo constituency chairman of the party, Martin Andonye.

Over two hundred polling station executives,and electoral area coordinators yesterday, Thursday, September 20, held a press conference in favour of Mr. Andonye, calling on the regional chairman to as a matter of urgency, reinstate the constituency chairman with immediate effect.

Mr. Andonye incured the wrath of the regionlal chairman for issuing an indefinite suspension letter to the party’s 2016 parliamentary candidate for the Nadowli/Kaleo constituency, Elvis Botah, citing gross misconduct and disrespect for party elders and patrons.

The decision seem to have infuriated the regional chairman who reversed the indefinite suspension imposed on Mr. Elvis Botah, and rather suspended the constituency chairman, accusing him of arbitrarily firing some constituency executives without due consultation with the regional executive committee of the party.

But it seems Mr. SB Kangberee has bitten more that he can chew as just a day after his action, mass protests began swelling in favour of Mr. Andonye.

At a press conference today, the polling station executives and electoral area coordinators accused the regional chairman of violating laid down procedures in his action.

According to them, the party constitution provides for an accused to be given the opportunity to be heard before any action is taken against him or her, an opportunity they argue was not given to Mr. Andonye.

They are therefore calling for the immediate reinstatement of Mr. Andonye while party laid down structures are used to resolve the matter.