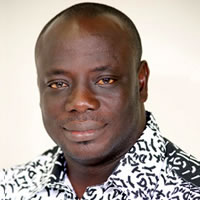 The NPP legislator for Kpandai Constituency in the Northern Region also condemned the De-Eye Group’s use of the Christiansborg Castle as its meeting place and office.

Majority in Parliament have supported the call by the Minority for the arrest and prosecution of members of the militia group affiliated to the governing New Patriotic Party (NPP) that trained at the Presidency Annex.

Deputy Majority Chief Whip, Mathew Nyindam, condemned activities of De-Eye Group, which used the Christiansborg Castle, Osu as their operational base and office.

Joy News investigative report on activities of the group reveals the group has two offices at this state building as the secretariat of the Group and another as the office of the Commander.

De-Eye Group is divided into four units – Alpha, Chalie, Delta, and the Special Unit. The Commander of this group is Nana Wireko Addo, popularly known as ‘Choman’, a former personal bodyguard of the President of Ghana, Nana Addo Dankwa Akufo-Addo.

“I watched it [documentary] keenly and I realised that, yes, it is a concern to every Ghanaian,” Mr. Nyindam stated in an interview with Joy News correspondent in Parliament, Joseph Opoku Gakpo, Friday.

The NPP legislator for Kpandai Constituency in the Northern Region also condemned the De-Eye Group’s use of the Christiansborg Castle as its meeting place and office describing it as an “abuse of incumbency”.

On Friday, the Minority in Parliament demanded that President Nana Akufo-Addo abdicates office immediately following the revelations in the documentary which they say has a damning national security threat right under his nose.

The Parliamentarians say Akufo-Addo has “lost all moral right” to occupy the high office after evidence suggests his complicity in the operations of the private militia at the seat of government annex.

“We insist that Nana Akufo-Addo must resign as President of the Republic of Ghana with immediate effect,” Deputy Minority Leader, James Avedzi said with cheers from his colleagues while addressing the media in Parliament Friday morning.

In his reaction however, Mr. Nyimdam was emphatic that President Nana Akufo-Addo had no knowledge of the activities of the group neither does the group enjoy any support from the state.