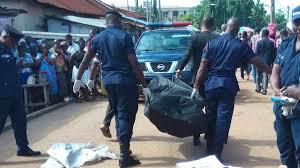 Police at Tema Community 22 have launched investigation into the death of a man believed to be the driver of a taxi cab in which his decomposing body was found this morning.

Ashaiman Divisional Police Commander, Chief Superintendent Sammy Amissah, confirmed detectives on arrival at the scene noticed that the body might be the driver of the taxi in which the corpse was found.

According to Chief Superintendent Amissah, preliminary investigation reveals no mark of foul play on the body.

Found in the car body are a car ignition key and a mobile phone suspected to be for him.

Chief Superintendent Sammy Amissah,  told BestNewsGH.com that police are going through the call-log of the mobile phone to reach contacts so as to identify relatives of the deceased.

The police boss went added that the body has since been removed and taken to the Police Hospital mortuary pending autopsy, whilst the taxi cab has been impounded at the Tema Community 22 Police Station.

It will be recalled that BestNewsGH.com reported earlier today about the discovery of a decomposing in a taxi cab with registration number GT 6718-19, opposite the SIGNATURE drinking spot at Tema Community 22.

The said cab was spotted parked there for the past three days with no one suspecting anything only for residents to be met with a strong and pungent smell from the direction of the cab this morning, leading to the discovery of the already decomposed body.