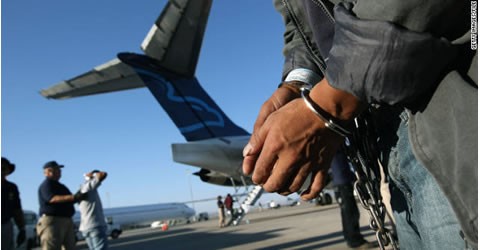 A Ghanaian national Patrick Owusu has been slapped with a 40-month time served sentence for hindering his deportation to Ghana.

US officials told Daily Mail GH Owusu will still be shipped out “once he has completed his sentence.”

The United States Attorney’s Office for the Middle District of Pennsylvania announced that a District Court Judge James M. Munley sentenced the 42-year-old Ghanaian to a time served sentence of approximately 40 months, for hindering his removal.

“ICE officers take pride in serving our community, we do so with honor and integrity, let Mr. Owusu’s sentencing serve as warning that people order removed must comply with ICE officials during all stages of the removals process,” said Simona L. Flores, field office director for ERO Philadelphia.

“ICE will continue to devote the full efforts of our agency to protecting citizens and enforcing federal immigration law.”

In 2012, an Immigration Judge ordered Owusu to return to his West African home country of Ghana after he was convicted of several serious criminal offenses while residing in the United States.

On March 31, 2014 and May 28, 2014, ICE officers attempted to remove Owusu from the United States, but he resisted and refused to board the plane. Owusu has remained in custody since being charged in December 2015.  He is to be deported back to Ghana following this sentence.

Owusu is currently in ICE custody.