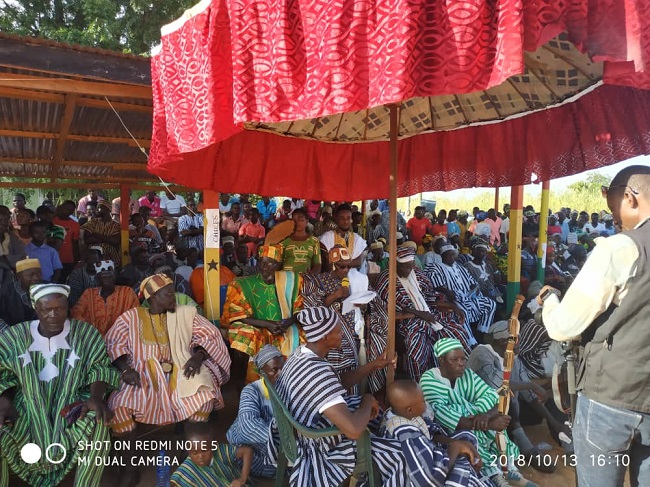 The Chiefs and people in the Bongo Traditional Area have observed their Annual Azambene festival with a call on the people in the area to protect the environment.

It was revealed that global warming is real and so there is the need for the people in the area to protect the environment because man-made disruptions to ecosystems can cause extinction of many species.

Speaker after speaker underscored the need for the chiefs, queen mothers and opinion leaders in the area to support policies and programmes of the Environmental Protection Agency and other relevant institutions to ensure that our environment is well protected for future generations.

The Azambene festival is celebrated annually in by the chiefs and people of Bongo Traditional area in remembrance of the movement of their great grandfather from Nalerigu in the East Mamprusi District in the Northern Region to their present location.

Its celebration, however, died out until the current Paramount Chief of the Bongo Traditional Area, Bonaba Baba Salifu Lemyaarum, saw the need to revive the festival to serve as a platform for public education, communication, communal interaction and cohesion in their localities.

The festival serves as a home-coming for sons and daughters from the area who are in the diaspora.

It also an occasion for families to re-unite and give thanks to God for a bumper harvest.

The Paramount Chief of the Bongo Traditional Area, Bonaba Baba Salifu Lemyaarum, appealed to government through the ministry of Education to as a matter of urgency absorb Azeem-Namoo SHS, Bongo Soe SHS, Bongo Beo Senior High Technical School, Balungu Technical Institute and Bongo Community Development Vocational which are all community based schools and also add them unto the computerized placement system.

The Vice President of the Upper East Regional House of Chiefs said the festival is used to fight indiscipline practices in the area. Bonaba Salifu Lemyaarum expressed gratitude to the President Nana-Addo led administration for implementing policies aimed at improving the living standards of the people in the country.

He said government is also focused on establishing a youth enterprise fund that will provide funding and tax incentives to young entrepreneurs and business development services to encourage the youth initiate start-ups.

Mr. Adongo said the theme which is “Supporting Education and Protecting the Environment through Culture the Role of the Community” resonates with a clarion call for them to embrace education and protect their environment.

He said the theme further enjoins them to hand down good values and ideals that they have learned to the future generation without any blemish of adulteration.

Mr. Adongo said in order to preserve our culture from the seeming invasion, there is the urgent need for a re-orientation of the people especially the youth to appreciate the wealth of tradition instead of looking up beyond the shores of the environment for acceptance and direction.

The District Chief Executive for Bongo, Peter Ayinbisa Ayamga, said the vision of the Nana-Addo led administration of Building Ghana Beyond Aid cannot be achieved without the support of the chiefs, queen mothers, stakeholders and queen mothers in the country.

He reaffirmed government’s commitment in investing massively in the country’s educational sector.

He called on the people in the area to support the assembly’s campaign for achieving open defecation free status.

The DCE, however, called on the people in the area to support programmes and policies of the environmental protection agency and other relevant institutions to ensure that their environment is well protected for future generations.