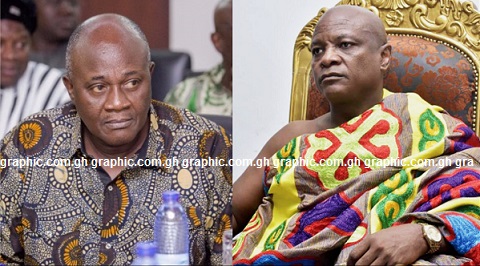 Minister for regional reorganization and development, Dan Kwaku Botwe has jabbed the paramount chief of the Asogli Traditional Area and President of the National House of Chiefs, Togbe Afede, saying the traditional ruler who has on several occasions criticized the commission instituted to meet stakeholders to iron out modalities that will lead to the creation of new regions has no right to berate members of the commission in the manner he is doing.

According to him, Togbe Afede cannot extricate or absolve himself from whatever findings and recommendations the commission has come up with, because he has been a part of the entire process from start to finish.

According to the Minister, Togbe Afede apart from being the president of the National House of Chiefs, is also a member of the council of state, from where the advice to the president for the creation if the regions was okayed.

‘’Why we decided to react to Togbe Afede’s vituperations for the first time yesterday is that if you talk about the prominent people that we engaged each step of the way to discuss the way forward for this project, he is one of them. First of all he is the president of the national house of chiefs, he is also a member of the council of state and it was from them that the president got the advice for the creation of the regions as enshrined in Article 5 and thirdly he is a member of the Volta regional house of chiefs and he has sat in all the meetings that we held and even go to him ourselves to discuss issues on this project and so if the committee has finished their work and submitted their report and you disagree with some portions of it, state your specific disagreement, don’t generalize it and say the committee did a shoddy work. An elder does not talk that way’’ he said on an Accra based radio station and monitored by BestNewsGH.com

Mr. Dan Botwe described the assertions by Togbe Afede as lacking merit and without foundation and must be treated with the highest contempt it deserves saying ‘’we totally reject that accusation that the work done by the committee is shoddy. Because this work was done by respectable men who have the expertise and know-how and were carefully selected, so it will be extremely unfair for Togbe Afede to describe them in the manner in which he did.’’