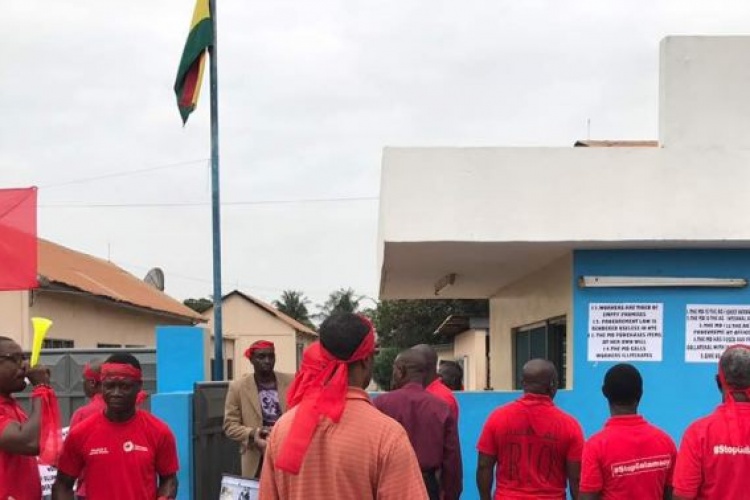 Tension is mounting at state-owned New Times Corporation (NTC), publishers of the Ghanaian Times and Spectator newspapers, as workers oppose a request by the managing director, Ms Carol Annan, seeking an extension of her four-year contract.

The workers accused the MD of almost collapsing the corporation, saying an extension of her contract will be suicidal.

But Ms Annan told The Finder that the litany of allegations leveled against her by the workers are not true, saying she would wait for the outcome of investigations by the National Media Commission (NMC) before officially responding to the claims of the workers.

When contacted, Chairman of the NMC, Yaw Boadu-Ayeboafoh confirmed that the commission has received a request for extension of the MD’s tenure, as well as a petition from workers of NTC kicking against any extension of the tenure of the MD, which expires on January 2, 2019.

According to him, the NMC has set up a committee to look into the concerns of the workers.

He explained that the committee would meet with leadership of the workers through their mother union, as well as meet the board and MD separately.

Boadu-Ayeboafoh disclosed that the committee yesterday met the workers through their mother union – the Industrial and Commercial Workers Union (ICU).

He stated that the NMC would only make official pronouncements on the issue after the committee completes work and submits its report.

A cross-section of the workers who spoke to The Finder on condition of anonymity for fear of victimisation say they are bracing themselves up for massive demonstration against Ms Annan, who, in their view, has performed abysmally throughout her tenure.

They are, therefore, calling on the NMC not to renew her contract, which expires on January 2, 2019.

The workers say extending the tenure of the MD would drive the final nail in the coffin of NTC because things are going from bad to worse.

The workers told The Finder that for the past four years, the MD has failed to provide the leadership that is required to salvage the corporation from the mounting debts and bank overdraft costs.

For instance, the workers stated that their back pay from January to December 2018 remains in arrears.

In addition, they said their Providence Fund contributions, Pay As You Earn (PAYE), and Social Security and National Insurance Trust (SSNIT) contributions deducted from workers’ salaries remain outstanding in millions of cedis.

They revealed that workers who retired many years are owed entitlements, and have to trek to the corporation begging for their money.

“It is pathetic to see these old women and men coming and begging everyday to demand their entitlement,” one of them said.

In their assessment, Ms Annan has the worst performance in the history of the corporation, attributing it to her lack of knowledge about the media industry and its operations.

They accused the MD of failing to supervise the operations of the various regions where the newspapers of the corporation are distributed, leading to massive embezzlement never seen in the history of the corporation.

As a result, a clerk at the Volta Regional office, Ho, has been jailed for five years for embezzling GH₵100,000 belonging to the corporation.

They say under the watch of the MD, regional operations also in Wa, Bolga, Tamale and Cape Coast were neglected leading to huge sums of money being squandered while she laments in Accra of “no money no money”.

According to the workers, the MD blames all others except herself to cover her inefficiencies and threatens workers who are vocal and critical of her performance.

As part of her strategy to stay on, and barely few days to the expiry of her contract on January 2, 2019, according to the workers, she has threatened mass transfers, which the workers believe are targeted at perceived enemies and to silence workers who may oppose the extension of her contract.

The workers say in the face of the overwhelming verdict of poor performance and the clear danger of the corporation collapsing, the MD, instead of resigning, is coercing the NMC to renew her contract.

It will be recalled that NTC workers staged a massive three-day demo against the MD for her poor performance last year.

They, at the time, demanded her removal, but the NMC and the board intervened and drew a roadmap for her to follow to ensure industrial peace, but that has not been followed through.