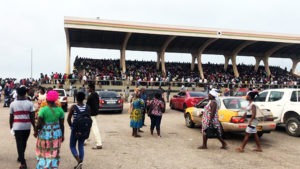 Officials of the Computerised School Selection Placement System (CSSPS) have started addressing various concerns of thousands of parents and children who have massed up at the Independence Square seeking senior high school placement.

The process, which ended abruptly on Monday without a single case being attended to, was masked by chaos, frustration, anger and confusion, with reports of prospective students and a pregnant woman collapsing due to the heat and congestion.

This situation was markedly improved when The Finder visited the Black Star Square yesterday.

There was increased police presence, which led to more calm among the people who had trooped to the square.

There was a notable absence of the chaotic throng that set Ghanaian tongues wagging.

In its place was several queues specifically demarcated to deal with specific issues.

All other persons with other issues were segregated and split according to their aggregates, ranging from aggregate 11 to 20, 20 to 30, then those with grades above 30.

The people in the queues were called in batches for their issues to be dealt with.

A parent, who did not give his name, said his ward had been admitted into a day school, although he had chosen schools with boarding facilities during the school selection process.

There were also special desks created to deal with people who could not find their names at the schools they have been placed or wanted to change their courses.

The CSSPS has also set up more centres to take care of the huge numbers coming in from the regions. These centres were set up at the various regional capitals in the country.

In the Central Region, the desk was set up at the GES office in Cape Coast. Western North and Western regions have their offices in the GES regional office in Takoradi.

For the Volta and Oti regions, the centres have been set up at Mawuli Senior High School, in Ho.

In the Ashanti Region, the centre was set up at the GES regional office in Kumasi.

The Bono Ahafo and Bono East have their set up at the GES regional Office in Sunyani.

The Northern, North East and Savannah regions have their desks in Tamale.

People from the Upper East and West regions should go to the GES regional offices in Bolgatanga and Wa respectively.

The Eastern Regional desk has been set up at the GES office in Koforidua.

Head of Communications at the Free SHS Secretariat, Josberta Gyan Kwakye, speaking to The Finder, said, “We are going to ensure that everybody who comes to the centre with genuine issues is attended to.”

This particular issue has come about because of the gender neutrality of some names, such as Nhyira, Adom, and Precious.

She stated frankly, “We cannot tell the difference.”

This year’s school placement has been fraught with several problems. On Monday reports started trickling in of that that some students who have been placed to schools around the country

Some persons, including a mother and her son, on Monday morning were rushed to the Ridge Hospital after they collapsed at the Black Star Square in their bid to continue the process of enrolment of their wards.

Thousands of frustrated parents and students from across the country trooped to the Black Star Square to have their wards enrolled into the various SHSs following the failure of the CSSPS to do that automatically.

The process is now in its second week.

The exercise, which is intended to help resolve some of the grievances of parents, has rather became a thorn in the flesh of parents, as most of the parents are not comfortable with the way the process is going.

Some parents The Finder interviewed said they had been directed by the Ministry of Education to converge at the Independence Square to help solve some of the challenges they are facing regarding the CSSPS.

However, since the beginning of the exercise, some parents claimed they had not yet been attended to. Some said they had been sleeping at the venue since Friday, a situation they claim boggles them.