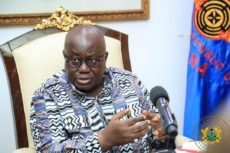 President Nana Addo Dankwa Akufo-Addo has said government has in earnest initiated steps to bring the perpetrators of the Banking sector crisis to justice. BestNewsGH.com can confirm the President as saying one case is already in court and that if Prima Facie evidence of criminality is found in the other ongoing investigations, the perpetrators of […]

Ato Essien, CEO of defunct Capital Bank has been arraigned before the High Court by the Republic over the role he played which led to the collapse of the bank, ABC News can report. The suit filed by the State is against Ato Essien and three other officials of the defunct bank, Fitzgerald Odonkor, Tetteh Nettey, and […]

Former Chief Executive Officer (CEO) of defunct Capital Bank, William Ato Essien has mounted a spirited defense for the integrity of Pastor Mensa Otabil, former Board Chairman of the bank and founder of International Central Gospel Church (ICGC) stating that he was a gem when it comes issues about banking. He vouches for his suitability […]

Popular pastor, Mensa Otabil, and his church International Central Gospel Church are among 15 shareholders and directors of defunct Capital Bank sued over the collapse of the bank in 2017. The Plaintiffs Messrs Vish Ashiagbor and Eric Nana Nipah from PricewaterhouseCoopers say the bank’s collapse was a “direct result’ of defendants’” “‘misgovernance” and “willful” breaches of banking […]

Government has signed a historic €500 million contract for the construction of sections of the Western Railway Line. The contract signed on Wednesday, June 3, 2020, is for the construction of a standard gauge rail line between Takoradi Harbour and Huni Valley, according to Railways Development Minister, Joe Ghartey. The deal is considered the largest […]