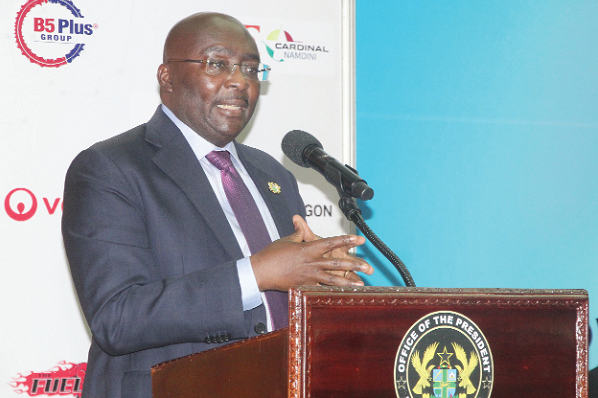 The Vice-President, Dr Mahamudu Bawumia, has charged central banks in Africa to actively build up their gold reserves by purchasing traceable and sustainably produced local gold at world market prices.

“We have not had that philosophy and thinking over the years to build our gold reserves, as we just produce and share,” he said.

Therefore, he said, opportunities must be created domestically for gold to be bought locally to create a major opportunity to build up reserves.

Dr Bawumia made the call when he opened the West African Mining and Power Exhibition and Conference (WAMPEC) in Accra yesterday.

The three-day conference, which attracted members of the Diplomatic Corps, captains of the mining industry and representatives from the ECOWAS Federation of Chamber of Mines, is on the theme: “Advancing a legacy of sustainable and responsible mining through innovation and partnership.”

Dr Bawumia said Ghana had been mining gold for over a century and its gold reserves should have been larger because of the role gold reserves played in stabilising currencies and providing balance of payment support.

He said the Bank of Ghana (BoG) had already started building its gold reserves after over 50 years without buying an ounce of gold.

He, therefore, called on other African central banks in similar gold mining countries to have a clear policy towards that because it strengthened the economies of those countries, as well as their reserves.

He said following the Russia-Ukraine war, the COVID-19 and “disruptions of the supply chain across the world, many countries are going to try to become more self-reliant”.

That and other factors called for a lot of South-South cooperation in many areas “because the lessons are there for us to see,” Dr Bawumia indicated.

“A new architecture will emerge and we have to be ready to play the game in that architecture, but it will require that our central banks also have sufficient reserves of foreign exchange to be able to weather the balance of payment crisis that will come from time to time, inevitably,” he said.

“So when I look at it, our mineral resources will have to play an important role as we go forward,” he added.

Dr Bawumia said most of the gold could also go into local refineries to build up local capacities and position them well in the sector.

“We must think a little bit outside the box, given the new horizon that is coming, and I believe that we can partner the gold mining companies that are here to enable us to achieve these objectives,” he said.

While highlighting the role of the country in the global mining setup, particularly in the 1980s, Vice-President Bawumia said: “We see the hope of the re-emergence of the old Gold Coast, now Ghana, in the befitting role of the mining hub of Africa.”

That, he said, meant that the country had to up its game by ensuring that all components and linkages of the mining industry were firmly established and maintained at a very functional level.

“These will stretch from concession acquisition, adequate funding for exploration through actual mining, refining, corporate management and development, as well as rapid emergence of the reputable upstream and downstream services that should all be fully established in Ghana.

“We should also hasten the development of the capacity to interact with the world’s natural resources banks, fund managers and leading stock exchanges,” he said.

In that regard, the Vice-President called on the big mining companies operating in the country and the subregion to work towards the emergence of a mining index on the stock exchanges and, thereby, accelerate their growth and significance in African mining.

A Deputy Minister of Lands and Natural Resources, George Mireku Duker, asked local and international mining investors to take advantage of the prevailing peace and security in the country to venture into sustainable and responsible mining in the sector.

He lauded the contribution of the Ghana Chamber of Mines and other stakeholders to promoting the country as a mining investment destination.

Mr Duker said the ministry had resolved to institute policies that sought to develop the mining industry.

He said the government, and for that matter the ministry, would not relent in stopping the menace of illegal mining, as it encouraged community mining.

The Managing Director of AngloGold Ashanti Obuasi, Eric Asubonteng, who chaired the opening ceremony, said the conference would help share ideas on how to improve the industry, adapt innovations and technologies and prospects for new business opportunities.

He was happy that stakeholders in the sector were meeting after a three-year break due to the COVID-19 pandemic and said it would help to network, partner and advance the mining industry and its role in national development.

Mr Asubonteng, who is also the President of the Ghana Chamber of Mines, said “our aspiration as a chamber is to position Ghana as the mining support services hub in West Africa and work closely with our partners in pursuing that aspiration”.

He, therefore, urged all the participants to actively participate in all the activities and share ideas that would promote sustainable and responsible mining in Ghana and beyond.

Mr Asubonteng also called for a strong partnership between the government and mining industry players, adding that regional economic blocs must be considered as sub-markets to collectively constitute the building blocks of the African Continental Free Trade Area (AfCFTA).

The Chief Executive Officer (CEO) of the Ghana Chamber of Mines, Sulemanu Koney, said with the COVID-19 and other occurrences around the world, the global economy was faced with complexities of calamities, with their acute impact on households and businesses.

He said the deliberations at the WAMPEC would elicit solutions to some of the challenges confronting the mining and the energy sectors, especially in West Africa.

“We have the firm belief that mining is about development and, indeed, a catalyst for socio-economic and sustainable development.

“It is our belief that the catalytic role of mining can only be realised when we are able to optimise the linkages between the mining industry and the non-minerals economy,” Mr Koney stressed.

Therefore, discussions at the conference would also focus on sustainability, local content, new products, as well as human capital development and the role of sovereign mineral funds in national development, he added.