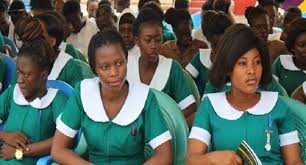 Some nurses who are yet to get married have threatened a demonstration  this year, should men not approach and propose to them.

They argue that they are increasingly becoming frustrated because of their unmarried status and that their plight is further exacerbated by the fact that their parents and family members are mounting pressure on them to get married.

Speaking in a recent interview, the group of concerned single nurses averred that they believe the only way out of their predicament is to embark on a demonstration to call attention to their plight and to let Ghanaian men know they are ready to accept their proposals.

Ghanaian nurses have come under attack in recent times by sections of the public who accuse them of not being ‘wife or marriage materials’ because they are materialistic.

But the nurses seem determined this time, to change their fate.

One of them said:

”We are worried and we don’t know why Ghanaian men are not approaching us. We are beautiful and we have our money too. If care is not taken we will go on demonstration out of frustration if we don’t get men to marry us this year.”

They expressed surprise that even after coming out to make known, their status as single nurses, Ghanaian men have still not found it expedient to approach them.