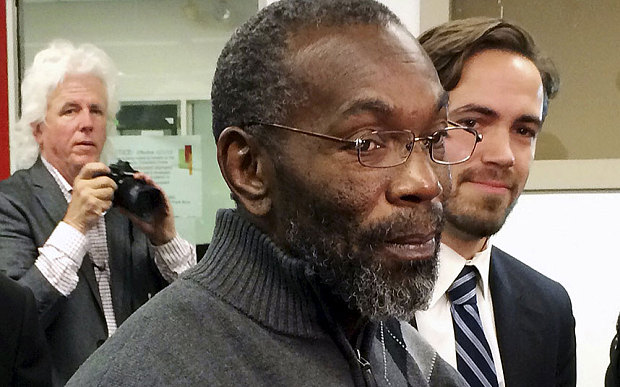 Ohio resident Ricky Jackson, the longest-held US prisoner to be cleared of a crime, to receive more than $1 million from the state for his wrongful imprisonment

An American man who spent 39 years behind bars for a murder that he did not commit will receive more than $1 million (£680,000) in compensation from the state of Ohio for his wrongful imprisonment.

Ricky Jackson, who was only saved from execution by a paperwork error, served the longest known sentence of any American subsequently found to have been wrongfully convicted.

“Wow, wow, wow, that’s fantastic, man,” Mr Jackson, 58, told the Cleveland Plain Dealer when informed that he would receive the million-dollar payment following an order from the Ohio court of claims. “I don’t even know what to say. This is going to mean so much.”

Mr Jackson was 19 when he was one of three best friends sentenced to death row in 1975 for the murder of a money order salesman outside a corner store in Cleveland.

He and two brothers were convicted on the basis of the testimony of a 13-year-old boy who said that he witnessed the killing of Harold Franks. The boy, Eddie Vernon, was on a school bus a block away with other children at the time. He later recanted his account as an adult.

Mr Jackson was found guilty although no other witnesses placed him at the scene at the time of the murder and there was no other evidence linking him to the killing. He was sentenced to die but mistakes in paperwork and appeals delayed the process.

The two brothers, Wiley and Ronnie Bridgeman, were freed in 2002 and 2003 after 26 and 27 years in jail, although Bridgeman was later imprisoned again for a probation violation and only released again in December.

Mr Jackson was freed from prison in November after a long campaign by the Ohio Innocence Project. The three men were finally cleared by a judge after Eddie Vernon last year signed an affidavit saying had lied and was coerced by police into testifying against them.

The Ohio court of claims ordered the state to pay Mr Jackson $1,008,055 for the nearly 39 years he spent in prison. The Bridgeman brothers will also be compensated for their years in jail.