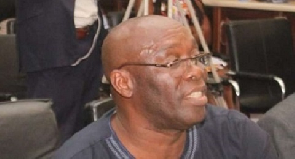 General Secretary of the opposition National Democratic Congress (NDC) Johnson Asiedu Nketiah has described the recall and reinstatement of the Eastern Regional Director of the Economic and Organised Crime Office (EOCO) as a face saving exercise aimed at doing damage control.

He maintains his position that the Executive Director of the office, ACP KK Amoah should be fired for incompetence and replaced with the reinstated Eastern Regional boss, Fred Dzeny, arguing that Mr. Dzeny has proven to be a more professional and effective officer than the national boss.

‘’This EOCO issue is akin to a pastor and a catechist in the church and the catechist goes to preach using the Bible and after he returns, the pastor says I have fired you because you used the Bible to preach. Is the pastor a native doctor or a traditionalist?. So the national boss must be fired’’ he added.

According Mr. Asiedu Nketiah, the EOCO boss has gone passed the retirement age of 60 and must be shown the exit saying ‘’he is even 65 years old. He should be home resting. He has disgraced the state and the institution and has proven he is incompetent’’.

General Mosquito as the NDC chief scribe is popularly known said the recall and reinstatement of Mr. Dzeny means the National boss did not do a proper investigation on the matter before suspending the him, adding that a sensitive institution such as EOCO which has the power to arrest and prosecute needs a fair minded person who will not act based on hearsay.