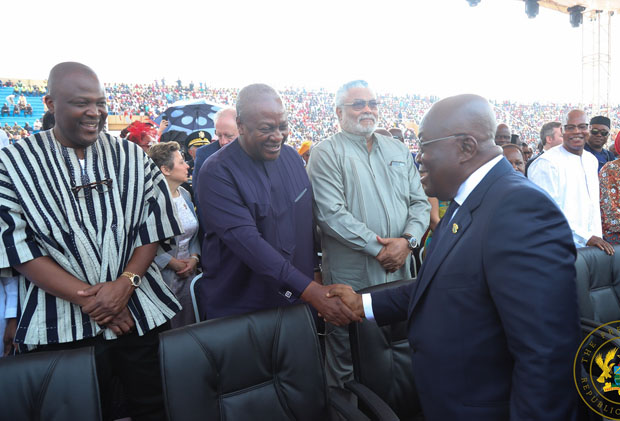 ‘’One of them, his deeds are negative and the other one, his deeds and luck are positive’’ in reference Mr. Rawlings and Mr. Mahama respectively.

His reason for describing them as the luckiest people in Ghana is that on Mr. Rawling’s part, he has been allowed to walk free after committing several atrocities against Ghanaians during the military junta days saying ‘’he should count himself as one of the luckiest people to live in this country’’

He continued ‘’Rawlings has done a great deal of disservice to this country. What he came with was greed and envy. He envied every person that was well to do. He killed the spirit of entrepreneurs and that has been a serious setback to this country’’

According to him, he witnessed certain killings of civilians by military personnel, acting on the instructions and orders of the then Chairman of the Provisional National Defense Council (PNDC), which murders he said were very barbaric.

Mr. Agypong who is also a businessman narrated who Mr. Rawlings attacked well-to-do business people and confiscated or destroyed their wares and properties and sometimes to the extent of burning peoples’ money, adding that his own mother became a victim and developed high blood pressures from the treatment she suffered at the hands of Mr. Rawlings’ military assigns.

On the part of Mr. Ibrahim who is the younger brother of former president John Dramani Mahama, Mr. Agyapong said he is lucky because he has transacted some fraudulent deals with some banks in the country and has been allowed to walk free.

‘’Why I am saying Ibrahim Mahama is lucky is that during president Kufuors’ tenure, he took a loan from merchant bank and even KK Sarpong had to resign. When Mr. Akoto and co made efforts to take him on, president Kufuor asked them to stop’’ he said.

According to him, Mr. Ibrahim has links and connections with both the ruling New Patriotic Party (NPP) and the opposition National Democratic Congress (NDC) and so is usually covered even when findings and allegations of corruption are made against him.