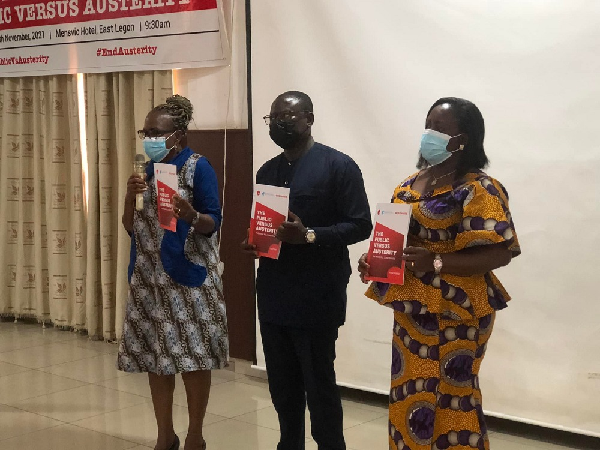 A new report by ActionAid Ghana, a non-governmental organisation, has revealed that although Ghana’s public sector wage bill has increased significantly over the last decade, it has not filled critical positions in the public sector.

It mentions the areas of critical need as education and health.

The Interim Country Director of ActionAid Ghana, Mr John Nkaw, in a speech read on his behalf at the launch of the report in Accra, said “public sector wage constraints undermine human rights, block the achievement of the Sustainable Development Goals and progress on women’s rights.

These deadly measures have left countries ill-prepared for COVID-19 and the climate crisis”.

He, therefore, called on the government to end austerity policies, saying: “We all need one voice to re-echo our concerns that now is the time to end austerity — to respond to the inter-connecting crisis of COVID-19, climate, inequality and regression of women’s rights.”

Titled: “The Public Versus Austerity: The Wage Bill Constraints”, the report analyses trends in public sector wage bill in the educational and health sectors and the freezing or depreciation of wages, and trends of the overall public sector wage bill as a percentage of government budget, revenue or Gross Domestic Product (GDP).

It also examines the links between Ghana’s debt servicing and the public sector wage bill and how these are related to the advice of the International Monetary Fund (IMF).

The report points to the country’s rapidly increasing public debt, amid declining GDP growth, which further points to an emerging debt crisis for the country.

The situation, it highlights, has the potential to affect the provision of critical gender-responsive social services such as health, education, social protection, sanitation and water.

Mr Nkaw said over the past 40 years, austerity policies had led to cuts in the public sector workforce that had undermined the ability of governments to deliver quality public services.

The report observed that the inability of the government to absorb more public-sector workers stemmed from growing rigidities in the budget as a result of sharp increases in debt service, particularly in relation to interest payments.

It also observed that Ghana spent about 39 per cent of its average domestic revenue on wages during the period 2016 to 2020.

It stressed that while the proportion of wage bill to tax revenue had been increasing at a much faster rate, its share in total expenditure and GDP had been declining.

With respect to the wage bill to tax revenue ratio, the report indicated that 2020 recorded the highest (56.3 per cent), compared to an annual average of 48 per cent over the last five years.

It further said the pace of growth had not matched the increasing need for the critical workforce required in the public sector, especially in education and health, thereby severely affecting the delivery of quality public services.

“Ghana is spending 59 per cent of its revenue on debt servicing, the second highest in the world,” the report said, suggesting that “this must be suspended in the short term to allow for a comprehensive response to COVID-19, and then renegotiated in the medium term to ensure that debt repayments do not compromise the spending on public services needed to create space for recruitment into the public sector and deliver on the SDGs,” it said.

“Action is also needed to push back on IMF policy advice that has pressurised the government in recent years to freeze public sector wage bills, undermining the capacity to employ more teachers, doctors, nurses, care workers to respond to COVID-19 and other essential frontline staff,” it added.

It said the “percentage of government revenue being spent on debt servicing (above 40 per cent between 2016 and 2019 and over 55 per cent in 2020) far exceeds the IMF’s sustainable threshold of 12 per cent and the 18 per cent IMF’s country-specific limit for Ghana”.