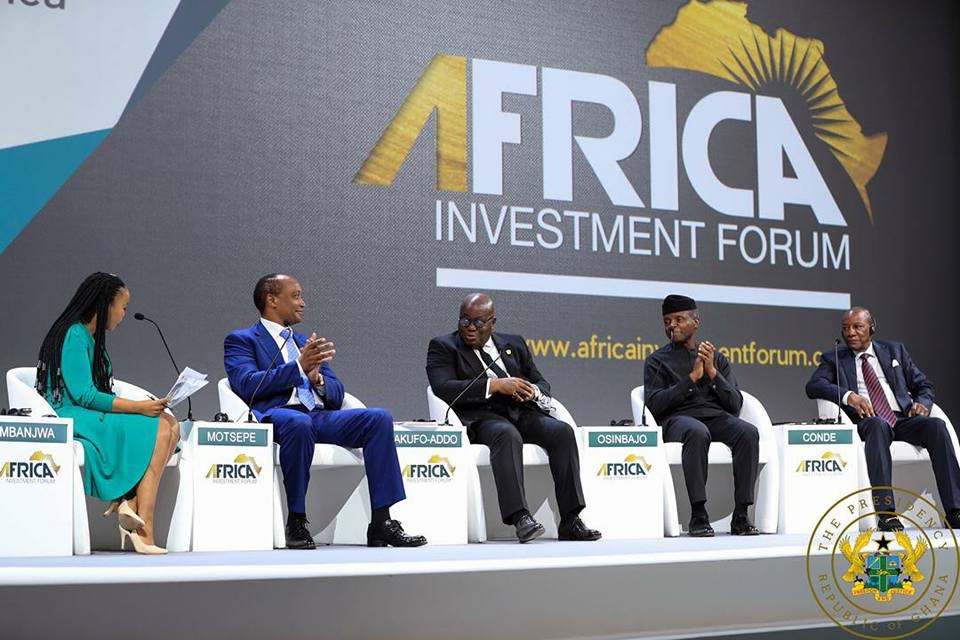 The President, Nana Addo Dankwa Akufo-Addo, says his Government does not see itself as a competitor to the private sector, nor will it substitute itself for the private sector in the growth and development of the country.

“The role of government, in our view, is to be a facilitator for the development of the private sector, and that has been the focus of our government,” he said.

President Akufo-Addo made this known on Thursday, 8th November, 2018, when he spoke as a panelist on “Championing Investments: Presidential Investment Chats” at the ongoing Africa Investment Forum, organized by the African Development Bank, in Johannesburg, South Africa.

Explaining the reasons for the modest successes chalked by Government, which has seen, for instance, economic growth rate increase from 3.6% in 2016 to 8.5% in 2017, the President indicated that his government has been keen on providing incentives for the private sector to thrive.

Some of these policies, he said, include a raft of tax cuts, the abolishing of nuisance taxes, reduction in utility tariffs, which, for example, have seen electricity tariffs for businesses reduced by as much as 30% and water tariffs also reduced by 10%.

Additionally, President Akufo-Addo indicated that his Government has established a clear perception about the rule of law in Ghana, stressing that “the rule of law is working not just for Ghanaians but also for foreigners who decide to invest in our economy.”

A third area focus of his government, he said, has been the promotion of policies that are stimulating industrial and agricultural activity.

Thus far, Government is developing strategic industries out of Ghana’s abundant natural resources of bauxite and iron ore, has established an Integrated Bauxite/Aluminium Development Authority to assemble the relevant financial resources for the full exploitation and development of Ghana’s large bauxite deposits.

With agriculture growing by less than 3% in 2016, President Akufo-Addo stated that his government introduced the programme “Planting for Food and Jobs”.

Through this programme, the President explained that Government, in the first year of the Programme, supported some 200,000 small holder farmers with inputs such as fertilizers, access to extension officers, improved seedlings and a marketing platform.

“This year, the programme has moved from 200,000 to 500,000 and the impact it has made in terms of yields in agriculture, ie the productivity of our farmers, as well as on its output is quite dramatic. We are seeing a much greater output of food stuffs in our markets across the country than we saw 3 or 4 years ago,” he added.

He continued, “That is the connection that we are trying to make to see how we can bring whatever authority that government has to support these initiatives with appropriate policy. Our goal is that, within 4 years, a million farmers will be in this programme.”

Again, with Government keen on improving the capacity of the state to manage the country and its economy, President Akufo-Addo indicated that the phenomenon whereby only some 6% of the population pay taxes does not inure to the benefit of the Ghanaian people.

As a result, the President noted that Government is initiating policies to broaden the tax net, explaining that “we believe we are capable of financing our own development out of our own resources.”

However, if only 6% of our people are within the tax net, President Akufo-Addo noted that “that already poses a major structural problem.”