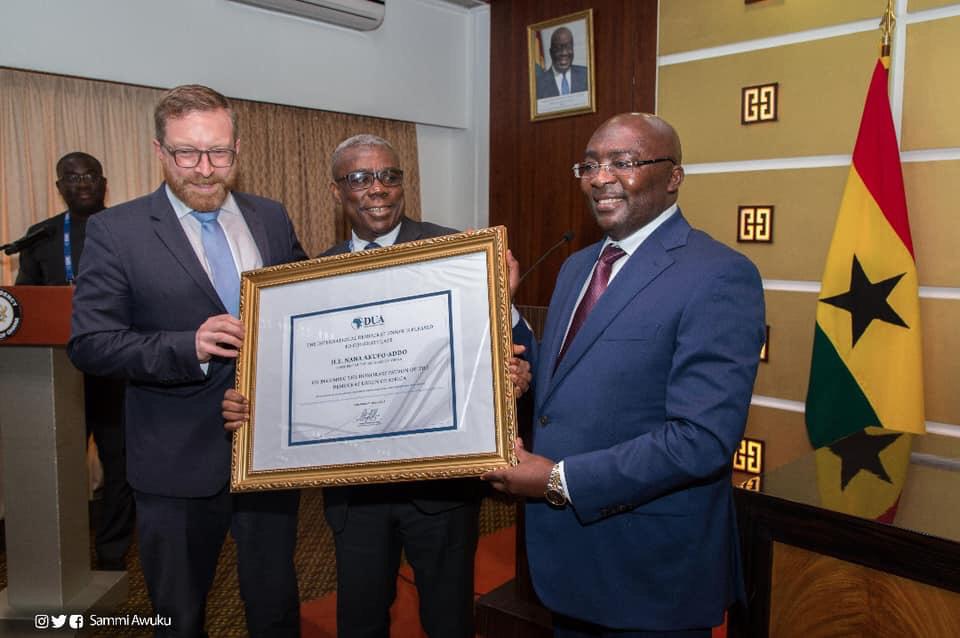 The President of Ghana, H.E. Nana Addo-Dankwa Akufo-Addo, was, on Monday, February 4, 2019, honoured by the International Democrat Union (IDU), for his unwavering commitments to upholding the tenets of democracy and good governance in Ghana and across the African continent. He was conferred an Honorary Patron of the Democratic Union of Africa (DUA), which is the African Chapter of the IDU.

The International Democrat Union is a global alliance of centre-right to right wing political parties as well as like-minded organizations and think-tanks that are dedicated to promoting democracy and conservative philosophy across the globe. It is comprised of 104 associate and full members in over 94 countries, and headquartered in Munich, Germany.

Ghana, and the NPP in particular, is hosting a 3-day conference of the Democrat Union of Africa from February 3 to 5, 2009, at the Labadi Beach Hotel, Accra.

On Monday, the NPP General Secretary, John Boadu and National Chairman, Hon. Freddy Blay, led the IDU and DUA delegation to pay a courtesy call on Vice President Dr. Mahamadu Bawumia at the Jubilee House, at which meeting the honor was conferred on the President by the Secretary-General of IDU, Christian Kattner.

Receiving the honour on behalf of President Akufo-Addo, who is out of the jurisdiction on official duty, His Excellency the Vice President, thanked the IDU/DUA delegation for the gesture and assured them of the party and government’s unrelenting support to the cause of the global alliance.