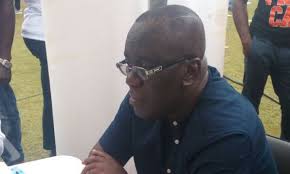 The Chief Executive Officer of the Forestry Commission (FC) Kwadwo Owusu Afriyie  says the fight against illegal Mining, popularly known in the local parlance as galamsey is being inhibited by machinations of some powerful people in the country.

Such moves according to him, makes it extremely difficult to rid the country’s forest reserves of illegal miners who have taken over almost all the reserves across the country and causing serious damage and destruction to the forest cover and water bodies.

Sir John as the Forestry Commission boss is popularly known, speaking on PM Express on Joy News Tuesday March 12 2019 said the activities of these powerful people who control the system is negatively impacting the successes achieved in the fight against the illegal mining menace, explaining that most of the culprits arrested have been released and are back to work, following interventions by these powerful people.

He cited the recent case where some persons together with some soldiers, were arrested for unlawfully engaging in galamsey activity in the Aprapraman forest reserve in the Ashanti region.

Mr. Owusu Afriyie opined that he had put the Minister for Lands and Natural Resources Kwaku Asomah-Cheremeh in the know and that the Minister was fully aware of what is currently happening in the system.

He said the Commission will continue to play its role of ensuring the preservation of the country’s forest cover and will not condone acts that will ravage and destroy same.