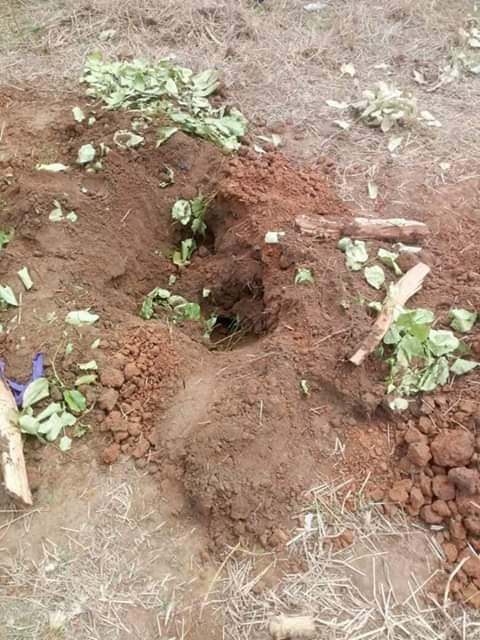 The Zenu-Atadeka police near Ashaiman and the Environmental Health Unit of the Kpone Katamanso Municipal Assembly (KKMA) are expected this morning to exhume the body of a 70-year old woman who was killed by her grandson and the body secretly buried behind her house.

This reporter’s investigation reveals that madam Patience Aku Hushie lived in her Atadeka home with her 25-year old grandson, Shadrach Hushie, an ex-convict and drug addict

On the 20th of April, this year, Madam Aku got missing from the community.

At about midnight of the same day, a neighbour spotted Shadrach digging a pit behind the grandmother’s house.

The following morning, the said neighbour confronted the ex-convict drug addict as to what he was digging the pit for, but he claimed he was going to bury his goat which was killed by a vehicle.

Three days later, people in the neighborhood experienced strong stench emanating from the direction of the said pit.

A report was made to police at Atadeka by a son of Madam Aku and in the cause of investigation, Shadrach who also disappeared unceremoniously was found in the custody of Ashaiman police over an alleged offence.

During interrogation, he admitted to killing his grandmother whose body he buried in the pit.

As to the motive, he reportedly stated that about a month ago, he went to commit a crime and when arrested, he persuaded those who apprehended him to accompany him to the grandmother for amicable solution.

Madam Aku, he claimed failed to bail him out and so when he managed to get out, decided to punish her hence the killing and secret burial.

Atadeka has become a sanctuary for criminals who have runaway from justice after committing offences in Ashaiman and other places.