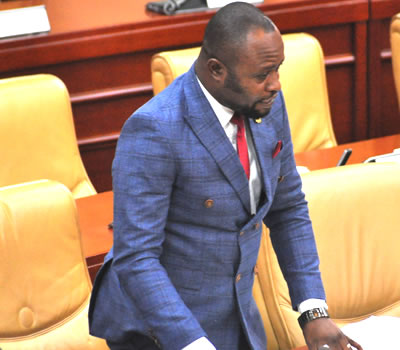 The ruling New Patriotic Party (NPP) Member of Parliament for Manhyia North Constituency in the Ashanti Region, Collins Owusu Amankwa is pushing for the immediate arrest, interrogation and prosecution of the National Chairman of the opposition National Democratic Congress (NDC) Samuel Ofosu Ampofo on the leaked audio tape that has since gone viral.

According to the Vice Chairman of the Defense and Interior Committee of Parliament, the NDC National Chairman must be held accountable for the various issues he raised, particularly concerning the targeting of particular persons and groups in the country.

Mr. Amankwa said the open admission that the NDC transported party thugs, Azorka boys from Tamale to Ayawaso West Wuogon for the January 31, 2019 by-election alone is ample evidence that Mr. Ampofo must be hauled before the law enforcement agencies to answer for his comments.

He said it is very dangerous for a respected senior national officer of one of the biggest political parties in the country to incite and instigate party members and supporters against well-meaning senior officials of the country.

According to him, all the happenings that took place in the Ayawaso West Wuogon Constituency during the by-election was pre-meditated and conceived by the NDC, per Mr. Ampofo’s confessions.

Mr. Ampofo, an elder of the Pentecost Church was also heard inciting NDC members and supporters against the Chairman of the National Peace Council, Professor Emmanuel Asante, the Chairperson of the Electoral Commission Jean Mensa and president Nana Addo Dankwa Akufo-Addo among other high profile figures in the country.