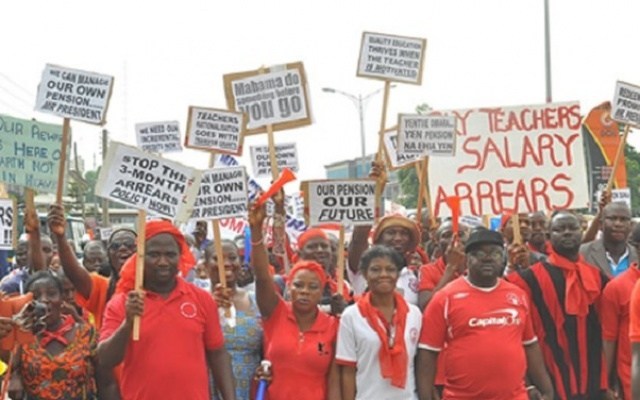 The Association of newly recruited teachers has again threatened to take further action if the Ghana Education Service (GES) fails to pay their salary arrears by the May deadline.

According to them, though several promises have been made by GES, it has not fulfilled any of them.

The association is also giving the GES until April 30, to complete their biometric registration.

In an interview with Citi News, President for the association, Nana Adjei Agyeman Collins said they expect that their salary arrears to be paid in full.

“The GES said that they were making plans to pay the first and second batch in May and June respectively. They also said they have employed technology to speed up the work that they are doing so they can pay us. We commend them but they have given us several assurances of the same sort. In February when we met the Deputy Minister of Education, he gave us the same assurance that we will get our salary by the end of March.”

“But as we speak now, we have not received anything. It will be difficult for us to believe whatever they are saying if things are not done before the deadline they gave us in May. We are cautioning the GES that, although they said, they will pay us, we want our payment in full. We have worked for seven months, so we want our salaries us such. Failure to meet these issues we have raised will prompt us to take the next action that will help us get our salary”, he added

The teachers recruited for the government’s double track system are demanding their salaries, months into their appointments.

They say apart from receiving their appointment letters, nothing has been done to process their salaries arguing that the government’s failure to pay them has made their lives unbearable.

Meanwhile, the Ghana Education Service says it working around the clock to pay salaries of the new teachers.

GES blamed the delay in processing the salaries on connectivity challenges.

“Management of the Ghana Education Service wishes to inform staff with salary concerns, especially on promotions and upgrades, and newly recruited teachers that the staff is working relentlessly to complete all data inputs to enable salary arrears to be paid.”